Kurilpa Bridge, currently under construction in Brisbane, Australia, is one of the most audacious and technically ambitious bridge designs of recent years. This AUS$63m footbridge over the Brisbane River (pictured right) is due to open this September, nearly two years after construction began. When it does open, it should be acknowledged as a unique urban landmark up there with the London Millennium Bridge, Gateshead Millennium Bridge, or Alamillo Bridge.

The bridge was the winner in a design-and-build competition, and it's always pleasing to see something radical to result from D&B, which usually gets a bad press for its inability to generate high-quality design. The structure is being built by Baulderstone Hornibrook contractors and Beenleigh Steel Fabricators (construction photo shown, right), amongst others, and it's impossible not to be impressed at the bravery of anyone taking on a project like this.

The span connects Tank Street in the city centre to Kurilpa Point in South Brisbane, and establishes a cycle route loop through the city, which also passes over the Goodwill Bridge, another Arup and Cox Rayner design.

The huge contrast between the two bridges comes both in style and cost. Goodwill Bridge's slender arch is rational, efficient, harmonious - and relatively inexpensive. Built for AUS$20m, I estimate it cost about £3,500 per square metre of deck, which is extremely good value for a large-span landmark footbridge (compare for example, Calatrava's Sundial Bridge which was about £10,000 per square metre; the London Millennium Bridge, about £12,000 per square metre, even before modification; or Gateshead which came in at about £22,000; I'm ignoring inflation in all these figures [and using today's exchange rates]). 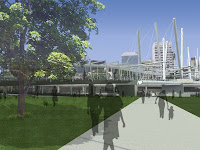 In comparison, Kurilpa Bridge is irrational, visually chaotic, disruptive, and possibly one of the most expensive fixed footbridges ever built. Guessing it to be twice as long overall as its 128m main span, and of similar width to its cousin, I reckon it cost £19,000 per square metre. This may be less than Gateshead, but Kurilpa doesn't sit up and do tricks.

Some readers of this blog will be shaking their heads by now. Yes, I know, it's the value of a bridge that matters, not its cost. Judgements will differ on whether Kurilpa Bridge is a beauty or a blot, but it's undeniably a landmark, an innovation and a substantial technical accomplishment. I guess only the locals can judge whether the value is commensurate with the impact on their tax dollars.

So, is it so expensive because it's a tensegrity structure, a form inherently difficult to build and not especially efficient for this sort of span? Well, its marina-full of spars and cables has the visual complexity of a tensegrity structure and appears to be based on tensegrity geometries, but it's not strictly a tensegrity bridge at all. The bridge deck is a continuous member carrying both bending and axial compression, and is stiffened laterally with what appears to be conventional bracing. There are several locations where struts interconnect (that tensegritarian sin), most obviously over the piers, which support the conjunction of two mast struts as well as the compression strut of the deck. So, it's tensegrity-ish, but not tensegrity-proper.

In fact, it's a complex variant on the good old cable-stayed bridge, with a substantial dash of the inverted fink truss (as at Forthside or Royal Victoria Dock) thrown in. This seems most obvious from the various construction photographs (several at Wikipedia, for example, as well as the one shown here), showing cantilevered construction using the conventional cable-stayed principle. So the astronomical cost, I assume, can only be the result of taking a very economic form of bridge and doing as much as is possible to eliminate its advantageously simple regularity and buildability.

I admire rather than enjoy its aesthetics, although I can see that the bridge may feel different in real life than to the photos and visualisations included here. The seemingly random cable and strut angles provide little in the way of reference for viewers, there seems to be a conflict between the large scale of the structure and the feeling of visual instability that might be present. Like many bridge engineers, I like a bridge where the structural principles are clear and comprehensible, which is unlikely to be the case for anything tensegrity-ish. But I do admire its audacity, the willingness to install something that works against the orthogonality of its surroundings, a provocation which offers restlessness in place of reasurance.

Just a quick comment to say thank you for including our blog, www.frameandform.com, in your blog list.

Your blog has become a reference in the blogosphere both in terms of content and style. Keep up the good work!

However, if you want to be the very first person to cross (on the Friday before the opening), you can bid for the number one position on eBay and money raised goes to charity.

For an up-to-date photo, have a look at www.brisbanewalks.com.au

Your analysis of the tensegrity-ness of the bridge is right on. You eclipse all other bloggers about this bridge with the precision of your words. I'm also quite pleased that the Wikipedia article on the bridge gets it right.

There is a wonderful new Snelson book out this year. I fondly hope some enterprising booksellers in Brisbane are stocking the book. I always learn something when I see new Snelson images.

The tensegrity does tend to obfuscate the cable-stay support structure of this bridge. Oh, well. It's some combination of functionality and art. Brisbane will certainly get tourists because of this bridge.

I enjoyed your comments regarding the Kurilpa Bridge but your assumption regarding the length has distorted you cost per sqm estimate.

The bridge is AUD$63.5 million and its length is 470 metres as it includes disability grades to clear the expressway and shipping channel. The deck width is 6.5 metres giving an area of 3055 sqm not including rest and observation platforms. This is AUD$20785/sqm which roughly equates to £10,500/sqm depending on exchange rates.

As you say, it is for the most part a chaotic cable stayed structure however the structure that stabilises the masts and supports the canopy consist of large horizontal, or near horizontal tubes held in place by cables and looking very much like a tensegrity element.