Every year, the British Prime Minister gives an award for "Better Public Building", intended to recognise not just architectural or engineering excellence, but also good procurement, positive community impact and sustainability. Of the 24 entries shortlisted this year, five are bridges, and two others have bridges as a key part of the scheme.

As this award bucks the trends of the other engineering and architectural awards schemes, it's worth seeing which five bridges have been shortlisted. They're certainly not all the usual suspects (none of the four bridges recently featured in RIBA's awards are here, for example, although one (Castleford) was shortlisted last year). Bridges often make a good showing in the Better Public Building scheme, but this looks like a vintage year. 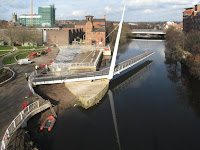 Designed by Ramboll (formerly Whitbybird), this is a cable-stayed swing footbridge (yet to be officially named) spanning over both the River Derwent and an adjacent mill race. It swings to one side when the main river floods. It's nice to see a cable-stay bridge with so few cables, also one that is modest and simple rather than unduly flamboyant. It has been shortlisted, apparently, because "the ingenious bridge design allows rotation using minimal energy" (inherent in the swing bridge choice). No mention is made of the fact that it opened a year behind plan and well over budget.

Clackmannanshire, Kincardineshire
This one was chosen for its "construction innovation and streamlined engineering" rather than architectural flair, although the design (by Scott Wilson, Benaim and Yee Associates) is admirably done. Launched incrementally, it bypasses the existing Kincardine Bridge. Each pier is supported on a single monopile, somewhat harking back to the good old days where bridges sat on hand-dug caisson foundations. Nice to see engineering get its proper recognition.
Infinity Bridge, Stockton-on-Tees 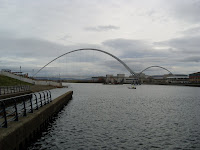 I've covered Expedition Engineering's footbridge here extensively before, so there's not much new to say other than that I laughed at the awards website's statement that it comprises "two steel arches supporting a pre-cast concrete deck produce one of the country’s longest footbridges but – at 125mm – one of the thinnest walking surfaces." Of course, it's only 125mm thick spanning transversely, with deeper edge beams spanning longitudinally - and thinner walking surfaces exist on many steel bridge decks. 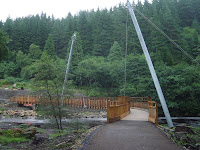 Designed by Forestry Civil Engineering, an arm of the Forestry Commission, this footbridge in the Kielder Forest must be the real wild card of the five bridges up for an award. They're no strangers to prizewinning bridges, with a BCIA award for the Salcey Forest Walkway [PDF]. It's a fairly attractive low-cost cable-stay structure, although the timber deck is somewhat let down by the fairly clumsy pylons.
M8 Harthill, near Glasgow 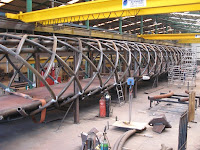 I've covered this footbridge before as well, having visited it earlier this year. The design by Buro Happold is one that I find problematic. The awards people seem to like its "elegance", finding it "visually striking" and with "high quality workmanship". I'd agree except about the elegance - the structural form is awkward and also far from economic. Having said that the fabrication of a complex structure like this is undeniably an impressive achievement.
Posted by The Happy Pontist at 9:01 PM

Thanks for the blog, always entertaining and informative. Keep up the good work.
Regarding Cathedral Green Bridge, a project I have some experience of, a couple of points:
Firstly; whilst the project did overrun on site, the original programme of nine months from competition win to completion on site was, I'm sure you'll agree, hopeful at best for what had to be a fairly complex opening bridge.
Secondly; the bridge is one part of a much larger project involving public space around the Cathedral, the new Cathedral Green itself and an ambitious public artwork between the Silk Mill and the bridge. To the best of my knowledge, the bridge itself was delivered close to the original D&B budget.

Thanks for the information. Yes, nine months would have been a little ridiculous, and it's often a problem that costs reported for these scheme are rarely limited to the bridge itself. Assuming "some experience" means "involved in the design", congratulations on the award nomination!