Foryd Harbour - how it works

Thanks to the New Civil Engineer, some light is shed on how Gifford's competition-winning Foryd Harbour design actually works. I previously speculated that this £4m opening footbridge might be a drawbridge, and indeed that's exactly what it is, although not in the conventional manner. 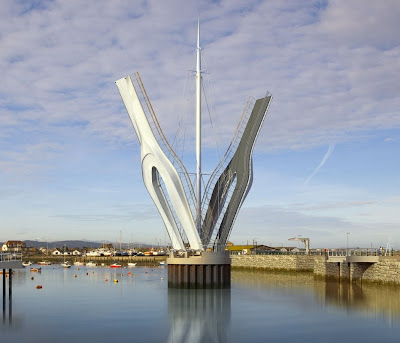 The design goes big on durability, with the pylon being made from stainless steel, and the lifting bridge decks from glass-reinforced plastic. It's not clear whether all parts of the decks are GRP, but the images released so far suggest they might be entirely GRP, in the manner of a fibreglass boat hull. I gather that minimum maintenance was a key issue for the bridge's promoter, Denbighshire County Council, so it's easy to see how this scored well, especially against the competitors (which I'll be showing here shortly).

These features alone make it a highly innovative design, and it's nice to see that emerge from the often conservative design-and-build route. However, it's equally easy to see it as risky and the sort of thing likely to prove a challenge technically, financially, and in achieving the desired programme.

The other unusual feature is that the drawbridge cables aren't spooled directly (as on castle moat drawbridges), but attached to a ring which moves up and down the pylon (presumably via a separate cable system). I'd be happy to be told otherwise, but I believe this would make the design unique. Again, while admiring the pioneering spirit, I can see all the risks and issues, and wonder what the judging panel made of them: how are lightweight GRP decks stable against wind when they're raised? How well does the ring operate when the cables attached to it pull it to one side under wind? How reliable is the mechanism generally?

If I were a betting person, I'd predict now that this design will prove problematic: it will fail to fit in the client's £4m budget, be completed on time, or prove unreliable in service (always a risk with new prototypes, especially for an opening bridge). I'm not a betting person, so I wish the designers the best of luck in avoiding the pitfalls!

I've got together three of the four other shortlisted entries, and hope to feature those here in about a week's time. They should make for a very interesting comparison.

As an aside, there's a letter in the same issue of NCE which praises Techniker's River Wear design (discussed here on several occasions last year) as an example of what engineers should aspire to aesthetically. It's deeply depressing that letter-writing engineers, who presumably learnt their bending moment formulae like the rest of us at college, are taken in by the superficially attractive styling of a design like River Wear, and are seemingly blind to the exceptionally challenging structural behaviour that it relies on. As noted previously, there's a need to teach civil and structural engineers to think more critically about design, and this letter just reinforces that need.
Posted by The Happy Pontist at 11:56 PM

Difficult to see this can work with such a slender mast structure, even allowing for the GRP decks being lighter than steel. The tiny collar must either be pushed up, using a hydraulic ram mounted vertically within the mast, or pulled up using a cable system. As there is nothing visible in the various images it has to be assumed that the mechanism is entirely in the mast. As anyone who has tried to raise a mainsail in a breeze will know, this is not always an easy system and is prone to blockages in the mast. Happily, you simply have to turn the boat into the wind to ease the problem. Not so easy with this bridge, unless it rotates too...?

The images suggest the mast is stabilised by outriggers and near-vertical cables, which will give it considerable bending resistance. I suspect the mechanism would be vertical ropes outside the mast, as these would be easiest to inspect and maintain. But the potential for problems with the collar would still seem considerable.

Three of the judges were bridge engineers, so hopefully these issues were well interrogated. On the other hand, the panel didn't include an architectural or design adviser, which might explain why a somewhat kitsch design was chosen.