While the TorVergata footbridge was an example of a very well-ordered application of tensegrity to bridge design, the proposed footbridge at the National Building Museum, Washington DC, is something else entirely.

Designed by Wilkinson Eyre and Arup, the proposal is to span 35m across the Museum's huge Great Hall, connecting galleries at a high level. I think it was first exhibited at the Venice Architectural Biennale in 2004, and I'm far from clear whether the design is still being developed, or stands any chance of ever being built.

Like Wilkinson Eyre's previous Challenge of Materials footbridge, a glass-floored span in London's Science Museum, the Washington bridge is intended to be an exhibit as much as a practical crossing. The struts are proposed to be glass tubes, with internal lights and sounds that respond to changes in load as people cross the bridge.

Quite how practical any of that might be is hard to judge (the detail of the joint between the tubes and cables would seem to be the toughest challenge). So instead, I will comment only on the general layout and the appearance of what, by any standards, is an extremely unusual structure.

Chris Wilkinson, one of the two founders of Wilkinson Eyre, has written [PDF] of how the firm strives for "lightness" in design, both in terms of weight and visual impact:

"As architects, we are attracted to tensegrity structures for their visual lightness and their efficiency. They offer the maximum strength for a given amount of material, which keeps the member sizes slender and light. This is particularly relevant to bridges, where long spans can be achieved with slender suspension structures, such as our Metsovitikos Bridge in northern Greece. Cable structures have movement and life, which adds to their appeal. When a bridge structure moves in response to your weight as you cross it, you know that it has been designed for efficiency. A certain amount of movement in structures is generally a good thing, so long as it is controlled within defined limits."

Structural efficiency is a difficult concept. It's far from clear that a tensegrity footbridge really does use less material than a more conventional design, but efficiency of material is certainly not matched by efficiency in construction. The Washington design would be exceptionally difficult to assemble, requiring substantial temporary support. To make it sufficiently rigid, it may impose significant loads on the existing building structure. 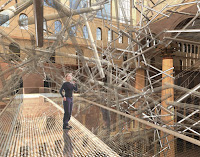 To me, the structure's visual lightness is somewhat doubtful: although it is developed from a series of simple tensegrity cells, the end result looks like a jumble of scaffolding freeze-framed in the act of collapse. While that offers an intriguing challenge to conventional ideas of structural elegance, it seems to be me to be visually very "busy" and hence at odds with the stated aspiration - it may be 'light', but it isn't 'quiet'. Indeed, something of the challenge involved visually is given in another Wilkinson Eyre quote:

"The underlying geometry is based on a series of tetrahedral cells, replicated numerous times to accumulate a visual mass capable of asserting itself within the extraordinary scale of the museum's courts while remaining essentially light."

This fundamental tension between the desire to assemble cloud-like mass and simultaneously to dematerialise the structure has the potential to result in an exceptionally interesting and unusual experience. I can't bring myself to like the design, visually it's just not an aesthetic I admire, but I do admire its ambition and radicalism.