Back in October, I reported briefly on a new footbridge at the University of Pennsylvania, called the Weave Bridge. At the time, it was nearing completion on site. Well, the US$2.4m bridge was opened to the public on 19th January, and an update on the finished article must be long overdue.

The bridge was designed by Arup, specifically their Advanced Geometry Unit (founded by Cecil Balmond, who is a professor at UPenn), although essentially they acted as concept engineer or even as architect - the detailed engineering design was prepared by Ammann and Whitney. This seems to be an increasingly common arrangement - the boutique engineer standing in for the architect while leaving someone else to do the "hard sums". Marc Mimram and Santiago Calatrava are others who take the same approach.

When I last posted, I noted:

"Balmond seems to have little sympathy for the conventions of bridge design, taking standard concepts like the arch or truss and transforming them into stained-glass geometric puzzles ... Balmond's design seems to arise, however, mainly from playing with geometry on a computer, rather than from the purely structural imperatives which drove James Warren's solution." 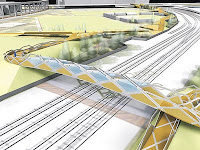 The image on the left is a design visualisation from before construction. It suggests a colorful rattlesnake structure, which I mistakenly likened to Warren's truss bridge design from the 19th century (thanks to Paul Kassabian for putting me right). In reality, it largely dispenses with the top chord of a truss, instead carrying the axial forces by means of the "X" shaped elements in the roof. This is like taking a pair of opened scissors and pushing them against a metal plate - the force tends to open them about the central hinge.

The result is a design with poor structural efficiency. The scissor action is resisted mainly because the "hinge" is in fact a solid welded connection, and partly by the restraining action of the side trusses. The connections must therefore be considerably over-designed compared to a conventional truss bridge, as must all the other steel elements. Quite how inefficient it is will depend on the extent to which the bridge is simply supported (with the roof "bracing" all in compression) as opposed to continuous over pier supports (with the roof "bracing" varying from tension to a lower compression). Some images suggest the latter is the case, but I can't tell for sure.

"Unlike Frank Gehry, who is happy to drape his bloblike forms onto any old framework that can hold them up, Balmond sees structure and design as one and the same. There are no vertical supports holding up the Weave Bridge because its twisting stainless-steel strips carry the load, in the way that cables and trusses do on conventional bridges."

Nonetheless, the compairison with Gehry isn't entirely unfair - both are designers who put abstract geometry to the forefront, often at the expense of functionality. For the post-modernists entranced by their piles of crumpled paper or the digital fantasies of algorithmic design, the modernist notion that form follows function is long dead. Instead, form determines function - the ability to generate a particular complex geometry decides the structural form of the bridge, not the exigencies of cost or buildability that preoccupy most engineers. 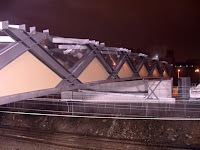 The image on the right (courtesy UPenn website) shows the bridge under construction. It seems less organic than in the visualisation, but much of that may just be because it's a close-up view. The tricky connections between the truss webs and the "roof bracing" look a little unattractive - you would visually expect the flanges on the web members to continue at the same angle on the roof rather than stand upright, but of course they have to do so. This visual oddness could have been reduced by chamfering the rectangular cross-section of the bridge, at the expense of yet more engineering complexity. 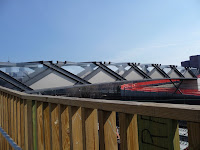 The image on the left (courtesy of Shana Lee on flickr) shows the bridge in its nearly finished state. I'm struck by how colourless it is compared to the early renderings, which is a shame because Balmond is interested in colour elsewhere. I'm also left wondering how much trouble they'll have cleaning the outside face of the glazing above the railway lines in the future - how well will this bridge weather?

The main difficulty is of course that of expectation, particularly for the engineering observer. For the lay person, I think it will look unusual but otherwise fine. For a bridge engineer, the absent top chord on the trusses defies what you expect to see. The question is whether the bridge is visually better or more interesting, and I think there's no real improvement over a conventional Warren truss structure, especially since there's a slender bottom chord member (presumably to support the floor) left in.

The bridge seems really to be designed to be viewed from within. The visualisation on the right suggested a contrast between translucent blue glazing, marked with lines to echo the timber flooring, and returning across the roof to mirror the floor panels. It's geometrically interesting if perhaps trying a little too hard. 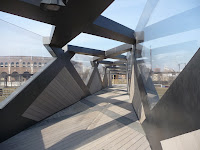 The photo on the left (courtesy Shana Lee again) again suggests much of the colour has sadly bleached out. The design seems clever, but not a delight. Little compromises have been made which detract, especially the loss of the glazed roof sections (presumably because they'd be too difficult to clean). I'm also not sure I like the interplay of the shadows and the floor "bracing" - they're too similar in colour and I'd prefer to see the bridge structure stand out rather than dematerialise.

As ever, it's almost impossible to review a bridge without visiting it in real life, and I've no plans to visit this one soon. Overall, I don't like it - the departure from conventional structural logic isn't justified by the creation of something sufficiently magical, and Balmond's Coimbra Footbridge in Portugal seems to me to be more successful. But I'd welcome other comments, especially from anyone who has visited it or was involved in the design.
Posted by The Happy Pontist at 8:03 PM

It's looking like the next generation in pedestrian bridge aesthetics is the experimentation with elements such as glass (coloured glass) and sometimes led lights. The aesthetics of a bridge are developed through its attachments rather than the structure itself.
I'm never really convinced the "greenhouse" effect is considered when glass enclosed structures are constructed.

This bridge would look quite nice at Newport Pagnell service station or something similar.

Yes, there is no top chord, but the result is actually a lesson in why one is necessary in order to avoid bulky inefficient design.

I disagree the bridge is designed to be seen from within and, to me, that is its real failure. The structure is expressed as plate steel componenents on the outside, which give it a character and form that is quite rich, and which will change with light and shadow, however the inner surfaces are smoothed and robbed of any such tactility or feature (although the frameless glass and timber panels are beautifully detailed). This bridge would be great to drive under but pretty soulless to encounter on your daily walk to work.

Just because you can does not always mean you should.

not his (groups) finest hour:(