This September, the world's first bridge of any significance which claims to be designed on the tensegrity principle will open in Brisbane, Australia (Kurilpa Bridge, pictured right). While drafting a posting on the bridge, it became obvious that some other proposed tensegrity bridges merit more than passing attention.

So over the next few posts, I'll be covering as many tensegrity bridges, built, unbuilt or never-really-intended-to-be-built, as I can. With that in mind, I guess some sort of introduction to the concept of tensegrity itself might be helpful!

It dates to the work in 1948/9 of American futurist Buckminster Fuller, and artist Kenneth Snelson. The term "tensegrity" (tensional + integrity) was coined by Fuller, who in his 1975 book Synergetics defined it as follows:

"Tensegrity describes a structural-relationship principle in which structural shape is guaranteed by the finitely closed, comprehensively continuous, tensional behaviors of the system and not by the discontinuous and exclusively local compressional member behaviors ... The integrity of the whole structure is invested in the finitely closed, tensional-embracement network, and the compressions are local islands."

Got that? As applied to structural design, it's normally taken to refer to a space-truss system comprising elements only in axial tension and compression, where no two compression struts are in contact. By maximising the use of slender tension members to provide the system's rigidity, tensegrity structures are seen by promoters of the concept as minimising material use overall, as well as offering visual transparency. 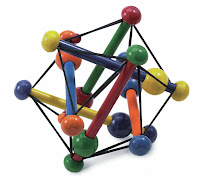 Perhaps the best known tensegrity structure to be built was the Skylon, erected in London in 1951 for the Festival of Britain. It's not a "classical" tensegrity form, as there are compression "elements" in contact with each other, where the support elements meet the ground. An example of a structure which fully satisfies the tensegrity principle (i.e. is self-contained) is the Skwish (pictured left), a child's toy constructed from wooden struts and elastic ties.

Most tensegrity structures resemble, at their best, an elegant cat's cradle of wires and struts. At their worst, they are more like a tangle of epileptic scaffolding. Their inherent flexibility, lack of robustness and visual non-linearity don't seem to lend itself to bridge structures, which are by their nature normally very linear in form.

So it will be interesting to see how various designers have risen to this challenge in designing tensegrity bridges ...
Posted by The Happy Pontist at 9:34 PM