A winner has been announced in the competition to design a £4m opening footbridge at Foryd Harbour, Rhyl, in North Wales. The winning design, by Gifford with Dawnus Construction, is a twin-leaf bascule bridge with a marked "nautical" theme. 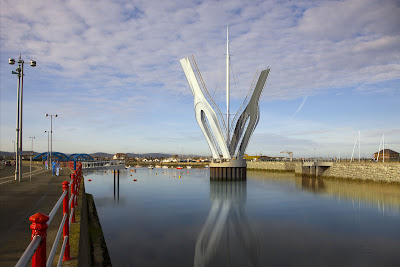 The bridge is one of several being built as part of Sustrans' Connect2 scheme, which secured £50m of lottery funding last year. Its two spans carry it 80m across the River Clwyd's harbour mouth, linking up a national cycle route and forming the centrepiece to a local regeneration scheme.
The competition was a design-and-build arrangement, an approach which seems far more successful in getting practical designs which go on to be built than, say, the open-to-all-architects competitions favoured by RIBA. There were four other entrants, and I'm told the promoter, Denbighshire County Council plans to make those public in due course. I have been sent two of them already, which make for interesting comparisons against the winner, but I'll wait and see if they all come out before posting those.
The press release and image make it hard to be sure exactly what type of bridge this really is. Given the mast and rigging in the image above, I'm wondering whether it's actually a drawbridge, which would be a fairly bold decision as it's hard to think of many other drawbridges being built in recent times! If, as the reported dimensions suggest, it has two 40m spans, then the wind loads in the raised position may be quite high for a drawbridge to carry. Hopefully more information on the engineering will come out in due course.
There are maintenance disadvantages to an opening bridge with the mechanism on a mid-stream pier - if the machinery breaks down while the bridge is open, there are obvious difficulties with its inaccessibility from the riverside. However, the bascule bridge is generally quick to open, offers unlimited "headroom" to vessels, and is less vulnerable to ship impact than alternatives.
It's also difficult to comment on the design's visual qualities, although the mast seems incredibly kitsch, and the piers look a little uncomfortable, with very slender legs on the approach spans and a huge sheet-piled lump in the middle. The walkway also splits as it goes round the mast, which I believe goes against Sustrans' own guidelines which are in favour of unsegregated footways and cycleways. Like many bascule bridges, it seems to lack a real landmark quality in the closed position, and I gather that Denbighshire were definitely seeking something 'iconic' - I don't see that this fits the bill.
I look forward to seeing (and being able to present) more information on this bridge! 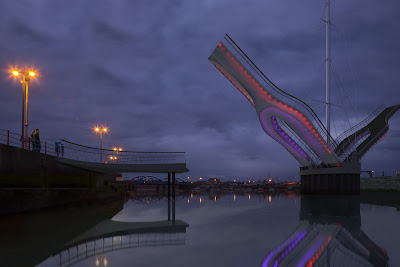 Is the mast functional or just decorative? Either way, the contrast between the massive central pier (presumably housing the twin mechanism) and the slender mast is incongruous - especially at low tide. Why not simply provide a single bascule?

I'd welcome the designer to let us know if they are reading! I am guessing from the images (click the small images to see more detail) that it is in some manner a drawbridge, given that there are cables running from the deck to the mast which must change in length when the bridge opens. But the mast doesn't look big enough to support any part of a drawbridge mechanism, or the out-of-balance wind loads which a twin-leaf bascule will carry.

I understand the design has been presented to the Design Commission for Wales, it would be interesting to see what they thought of it.

Why two bascules? A very good question, especially since I am told that the water on one side of the pier is not deep enough to navigate. Having seen three of the other entries now, two of those are the more obvious single-leaf bascules. I'll be presenting them all here when I get time to write them up properly.