So, with an introduction to tensegrity out of the way, let's see who would actually be crazy enough to try and design such a bridge. 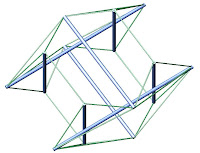 The bridge is planned to cross a highway near to the University's Faculty of Engineering, and the design has been developed by the tensegrity systems group there. They chose a tensegrity design for its "sense of transparency and lightness", and their design takes a modular approach, connecting together a row of five "expanded octahedra", each of which is an internally self-stable tensegrity structure (pictured, right).

In combining the modules (see image left, showing two modules added together), much of the simplicity of the basic element has to be eliminated. If you compare the two pictures closely, you'll see that several additional cables have been added to provide adequate rigidity in all directions, and also that where the modules join, two struts come together at a common node. A strict tensegritarian, if there were such a thing, would regard this as a no-no, but it's a common and perhaps unavoidable fudge in tensegrity bridge designs, acknowledging that the basic principle really isn't well suited to this application. More information on the design development is available online in "Una passerella pedonale tensintegra per il campus di TorVergata" [Powerpoint]. 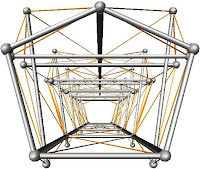 Form finding techniques have been used to optimise the geometry of the final design (see image on the right). Preliminary engineering studies have shown the design not to be susceptible to vibration, and to weigh about the same as a conventional footbridge design for the same span.

The bridge is proposed to be built by assembling the modules off-site, folding them down for transportation, assembling and prestressing on site, and finally erection by mobile crane. This is not in itself significantly more onerous than a conventional bridge, with the exception of the need for prestressing, which has the potential to be complex.

Visually, the adoption of a modular approach eliminates much of the tangled chaos that is common in tensegrity structures - the bridge seems well-ordered, visually comprehensible, and not entirely unfamiliar. That makes me wonder why you would opt for tensegrity at all, if a similar truss bridge structure could be provided more economically by conventional means, while offering greater freedom to be shaped by the designer. The question in this instance is whether the real transparency attained justifies the effort.

While this bridge seems very unlikely to be built, it's not entirely impractical, and particularly nice to see academia seeking to bring the abstruse and exotic into the real world.

Hi THP! It is a nice surprise to find this fair and detailed review on your blog.
Tensegrity systems have good properties for soft, variable geometry structures but, unfortunately, 'pure' tensegrities do not carry loads very well.
As footbridges are open to a pluralism of solutions, this one is intended to be like a sculpture which can be observed not only from a distance but also by walking in its interior. Moreover, being built close to the faculty of engineering, it embodies the challenge in research.
The newer design is much cleaner and has less additional cables, as you can see in the last part of the ppt presentation.
Just a footnote, the linked abstract at the beginning of the post is contained in a poster first presented at the IASS Symposium 2004, Montpellier, France.

This is an intereting article. About two years ago I undertook the design of a tensegrity bridge, and got quite a long way before admitting defeat.

The main issue I found to be stiffness, with the prestressing forces required in the cables to minimse deflections resulting in very high stresses in both tension and compression members. This significantly increased their size, and a lot of the 'transparency' was lost.

After about two weeks of toying with the idea, it became apparent (as with so many things) that there was a good reason why a 1950's idea had not yet been translated into functional design!

I expect, as you note, that the compromises required to fulfill the structural requirements negate much of the aesthetic appeal of 'pure' tensegrity.

I will be very interested to see how the Australian bridge in the previous post deals with all the problems, but wish the designers the very best of luck!