One of the great footbridges of modern times was Jürg Conzett's first Traversina Footbridge, a delightful filigree timber-and-cable design that was built in Switzerland in 1996 and then sadly destroyed by a rockfall in March 1999. Luckily for pontists everywhere, it was replaced in 2005 by an equally impressive structure, also designed by Conzett. The second Traversina Footbridge is a highly unusual timber-and-steel suspension bridge, which, like its predecessor, perches high above a precipitous gorge. 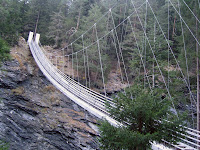 I visited the bridge last November, and noted that the span was a tribute not just to its remarkable designer but also to the people who built it in such a difficult setting. The bridge's dedicated website includes many excellent photos of the construction process, and the people involved, as well as descriptions of the bridge in German (there are more construction photos online elsewhere).

I only recently discovered that there's an entire book devoted to this bridge, "Traversinersteg" (ISBN 3-8030-0662-7, Ernst Wasmuth Verlag, 2006) [Amazon UK], by the photographer Wilfried Dechau. He was also the photographer for Mike Schlaich and Ursula Baus's excellent volume, "Footbridges", which I reviewed here last year. And having just received a copy of the "Traversinersteg" book, I have to say that it's well worth getting hold of.
The photos on the website are nice, but nowhere near as attractive as when reproduced at larger scale in this gorgeously designed, large-format (27.8cm by 38.2cm), slipcased tome (Amazon has images of some of the pages).
The establishing images of the spectacular location in the Via Mala valley set the scene. The building of this bridge was at once acrobatic and heroic, and also intimate and craftsmanlike. Construction of the foundations required concrete and materials to be lifted up the hillside on an aerial ropeway suspended from trees, and the bridge span itself involved a team of specialist climbers.
The photos clearly show this range of emphasis - construction workers suspended in harnesses over the abyss, as well as close-ups of hands tightening bolted assemblies. There are several portrait images, showing a range of people involved in the scheme, not only the designers but also the workers who are so seldom credited in the creation of landmark structures. I believe one of Dechau's main concerns was to depart from the conventions of architectural photography, which fetishise the object and largely discount human involvement. If so, he has succeeded admirably.
Many of the photos are reproduced at full page size (or to fill a two-page spread), which really does them justice. Use of colour is sparing but effective. My favourites tend to be the photos that are most vertiginous, that capture what is unique about the bridge and its setting.

The book also includes short texts by Jörg Schlaich, Ursula Baus and others. Schlaich makes the point that "watching [the bridge] being built is often more interesting than admiring the finished structure", but I'd suggest the Traversinersteg is a rare case where the bridge is as impressive as its making. Schlaich and Baus both note that the bridge was built without scaffolding, that the materials required to build it mostly form part of the final structure, even to the extent of using timber from trees cut down to make space for the aerial ropeway.

There are relatively few bridges which merit a lavish book to themselves, but this is undoubtedly one. It's also a rare book where the design and imagery is as impressive as the structure it decribes. It's not going to be casual purchase for anyone, but I'm delighted with it.
Posted by The Happy Pontist at 9:23 PM

This is truly a fantastic book and one which celebrates the design and construction of a special bridge by people who have a deep affinity for the unique place in which they are building. Wilfried Dechau is an exceptional photographer. Every bridge designer should own this book, and should aspire to creating something so brilliantly suited to context yet so perfectly modest and simple in its execution.

If someone wishes to complete the information about a the First Traversina Footbridge, there is a new post in frame and form.