I recently posted the winner in the Foryd Harbour Bridge competition, a design-and-build contest for a £4m opening footbridge at Rhyl in North wales. It was an unusual twin-leaf bascule bridge, with a central mast resembling that of a ship, to be designed by Gifford and built by Dawnus.

I've been sent information and images for three of the four other entries, and rather than wait for the promoter, Denbighshire, to make them all public, I thought I'd just get right on and show them here. As ever, click on any image for a larger version (links are given only where I've found relevant information on a firm's website).

First, a few thoughts on the engineering aspects. The swing bridge (from Knight Architects & Parsons Brinckerhoff) is at a disadvantage on the reliability front, as swing bridges require interlock or jacking mechanisms at the ends in order to properly secure the bridge in its closed position. This isn't necessary for a bascule bridge, which can secure itself in place by virtue of its dead weight. As a result, a bascule solution has one less mechanism to cause problems.

The Knight / PB design also shares a disadvantage with the winning Gifford design, of having a central pier, and therefore no fixed link from shore to the operating mechanism. This means that electrical and hydraulic supplies have to be buried below the river bed, adding to the environmental impact of construction, and also that access for maintenance is rendered more difficult if the bridge mechanism were to fail while in the open position.

In favour of the swing bridge, and the Mott MacDonald bascule variant, is that the centre of gravity and centre of rotation of the bridge can be located at the same point. This balances the bridge such that the mechnical power required to operate it is much lower - the weight of the bridge is balanced in all positions. Essentially, the mechanical plant only needs to overcome wind loads, and again the swing bridge is best for this, with perhaps the lowest operating cost of any of these designs. The Flint and Neill / Moxon bascule cannot possibly have the two centres coexistent, so is in an unbalanced position throughout most of its opening cycle i.e. the machinery has to push the bridge's weight around as well as overcome wind loads.

From a construction point of view, I'd imagine the PB / Knight design causes most disruption to the estuary simply due to the sheer size of what must be assembled and the possible need for temporary propping in an unbalanced construction state. However, the differences will be small.

The Flint / Moxon design will clearly have structural issues to be addressed by virtue of being supported on one edge only - it must be very carefully balanced, and even then design against twisting due to wind when open might be a challenge.

However, the most unusual of these designs is the Mott MacDonald bridge. I understand that the "ring" feature rotates about its virtual centre on roller bogies , which would mean it is similar in design to the Bellmouth bascule bridge, and the Falkirk Wheel. There's a clear visual resemblance to the latter, although I think the Wheel's fins are architectural, rather than forming a counterweight as on the Motts design. I do wonder how the Motts bridge behaves laterally - the ring doesn't look wide enough to be stable under transverse wind loads.

Visually, my favourites are the Flint / Moxon and Motts designs. The PB / Knight bridge is just too "samey", with echoes of bridges like the South Quay Footbridge and Swansea Sail Bridge. It is very nicely detailed, especially in avoiding the expense of a torsionally stiff box girder.

I very much admire the simplicity of the Flint bascule, and while the Motts bridge has plenty of "logo potential" the ring and its fin look a little small and out-of-scale to the whole bridge on some of the images. Nonetheless, I prefer all three of these to the actual winner. 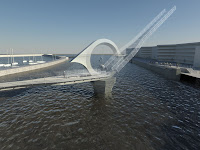 The swing bridge may not be a unique form (actually neither of the three runners-up is) but at least it is obviously low energy to operate. The Flint & Neill design would need much more "oomph", but it too is straightforward, whereas the Mott scheme seems hopelessly optimistic - the pointy ear on the Mott scheme is much too small to be a counterweight, so the unbalanced forces applied through the roller bearings will be considerable. God knows how the winner will really work, it seems to be by far the most complex and least proven mechanism, and is a very bold (strange) choice for a publicly funded and owned bridge.

I think the example of the Knight / PB design is interesting with regard to what promoters are seeking when they ask for an "iconic" bridge. The swing bridge is iconic in many ways - it's a landmark, it would be reasonably recognisable as a symbol of the locality, and it's not entirely identical to other bridges elsewhere, only part of a standard type, a type which has arisen as a logical response to certain constraints. I guess you could regard it as admirable in failing to pander to the demand for novelty.

The other three entries all offer far more in the way of novelty, and given the choice of the winner, I'd guess novelty (or uniqueness) played a big part in the promoter's idea of "iconic" i.e. they wanted a Gateshead Bridge, not a Golden Gate Bridge, although both are icons.

Interesting point. The Swansea Bridge and South Quay are both iconic, but are apparently the same, so what does that word really mean? Does it mean unique or does it mean extraordinary? It doesn't necessarily mean appropriate and contextual. And is it a sensible thing to demand in the first place? Most grown-ups accept that iconic status is earned, as the wider public engages with and then adopts a design as its own. Icons are not created, or designed or even novel, rather they emerge over time - a quality not always available to a local authority in urgent need of a quick fix. Time will tell whether the jury panel's selection is short-sighted or prescient.

In reply to the first Anonymous post, I was involved in the Motts design. The "pointy ear" (we preferred "shark fin"!) is definitely able to act as a counterweight - it contains a lot of ballast steel, and there is also some heavy steel in the rolling quadrant of the ring girder (both for stiffening and weight). Together, these exactly balance the weight of the lifting span, which is kept light by using a tapered, thin-walled steel box section plus lightweight GRP flooring. So I can assure you that it does balance!