Earlier this month, on the 14th May, Glasgow's £7m Tradeston Bridge opened to the public. Nicknamed the "Squiggly Bridge" (in sympathy to the nearby "Squinty Bridge"), it was designed by Halcrow with Dissing + Weitling, and built by BAM Nuttall. Following a short preview back in March, the Happy Pontist has sent a special reporter all the way to Glasgow to have a proper look at the finished bridge.

The opening was as much as a year behind schedule, following difficulties with the riverside walls, disputes with the fabricator, and arguments over DDA compliance. The budget has been stated at £7m (roughly £14,000 per square metre, expensive for a landmark footbridge, albeit still only half the budget for the previous Glasgowbridge proposal on the same site). 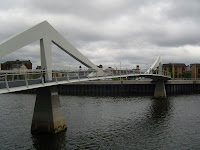 Previously, I noted that the bridge was somewhat sober and colourless. Its stark, bloodless quality is certainly very apparent in reality, although in spite of its stiff angularity, it remains surprisingly tactile. The bridge was criticised as shortening the pedestrian route across the nearby George the Fifth Bridge by only a little, but was relatively well used while I was there, particularly given the overcast day and lack of riverside attractions. Several people were stopping not just to look at the bridge, but to touch it. 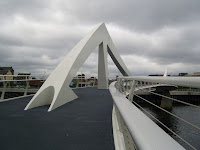 Visually, it is sharp and striking, instantly memorable and in this respect best seen from a distance. Although there’s little of note to be said about its more intimate details (the deck surfacing and parapets), closer up its visual drama and interest is enhanced. In elevation, the arrow-head supports are visually straightforward, but from almost any other angle their curves and tapering faces change constantly as you walk around and across (see picture, left). The scale of the pylons is well-balanced between the human and the inhuman. 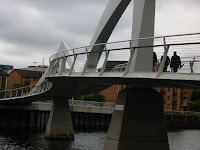 Only the ultra-slender deck disappoints in this regard – from certain views, perspective foreshortening makes it appear as if there’s a sharp kink in the edge of what is in reality a sinuously curved deck (see picture, right).

Why is it S-curved at all? Judging from the Glasgow council’s press statements, this is to provide adequate air-draft to river vessels. If that’s right, then curving the bridge in plan gives the bridge enough length to rise up and over the navigation channel without offending disability access gradient limits. The bridge deck’s exceptional slenderness may also have been driven by this demand. 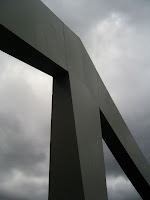 I admire its minimalism, even if it’s in danger of seemingly brutalist: my travelling companion on this trip, not a bridge designer so perhaps more representative of the fabled Joe or Jane Public, thought the bridge ugly, industrial and “a monster”.

I’m less sure how well the uniform pale grey colour will work at different times. 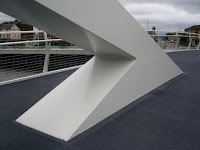 Most surfaces offer an attractive flatness (although not all the welds have been ground flush, so there’s still some sign of its making), but only the surfaces underneath had much in the way of reflected light and shadow. Imagine the same bridge in polished stainless steel! 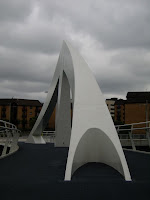 The curved recesses at the foot of each arrow-head are clearly designed to discourage people, particularly on wheels, from mounting the top surface of the inclined “stay” members (for this is in some ways an unusual variant on a cable-stayed bridge). The bridge hasn’t been open long, but there is already considerable damage to the paintwork and several tyre-tread marks, suggesting that Glaswegians are more intrepid than the designers allowed for (as I predicted previously). I was certainly able to walk up the surface, and it wouldn’t be especially hard to get to the top for someone less nervous about the possible appearance of the police.

Despite its slenderness, the bridge deck was generally stable and free from wobble – but not entirely so. Even under relatively light loading, I could feel a very definite vertical vibration at midspan. Whether it’s enough for people other than nosy engineers to notice, I couldn’t tell. 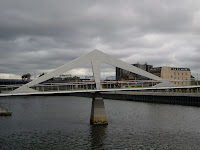 It’s also too early to tell how well the bridge will fulfil its stated aspiration, which is to act as a focus for regeneration investment on the south bank of the Clyde, and establish a high-quality riverside appropriate to the high-value businesses sought on the north bank. It’s not the best stage in the economic cycle to judge how well it will succeed in this aim.

Overall? I do like its simplicity, its flat yet sculpted quality, and the way its curvature generates visual variety out of such limited means. I’m nervous about its susceptibility to trespass and graffiti, and hope it doesn’t have to be disfigured to discourage climbing (a risk that could have been minimised by adopting diamond-shaped rather than rectangular section “stays”). It’s good to see that there are still new tricks to be played with the established repertoire of bridge forms. And after the fiasco of the previous bridge design competition on this site, I’m just glad a landmark bridge did finally get built here. It may lack the showmanship of the original competition designs, but as is always said about minimalism, sometimes less can be more.
Posted by The Happy Pontist at 7:59 PM

Good description HP, thanks. I like the look of this bridge. The 'brutality' is probably the shock of the new and will soon fade. What is the lighting scheme? I think the design has a simple, strong character and is a relief after the never-ending stream of daft and immodest showpony competition winners.

Correction : This bridge was fabricated, shipped & finally erected on site by RBG Ltd of Invergordon. BAM Nuttall provided the concrete peirs on which the bridge sits.

More on the bridge's entirely predictable vulnerability to being climbed:

Craze of running over new Glasgow bridge could be killer, police warn