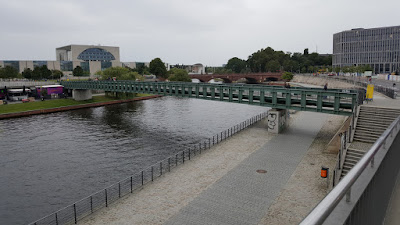 For now, I'll keep heading east along Berlin's River Spree. After the Moltke Bridge, the next structure is the Gustav Heinemann Bridge (Gustav-Heinemann-Brücke), which was built in 2005.

The design was selected as the winner of a competition. The bridge was designed by architect Max Dudler and engineers Grassl and KLW Berlin. Lighting was designed by Designplan Leuchten. The bridge connects the forecourt of Berlin's central railway station to the various central government precincts around the Spreebogenpark. It is named after former President of West Germany, Gustav Heinemann.

The design seems to be a celebration of austerity. The two edge girders are Vierendeel trusses of constant depth and bay spacing, and the use of constant H-sections for all the members adds to the visual simplicity. The bridge is 5m wide, with wooden decking supported on steel cross-members.

The truss girders are 2.25m tall, but the centre-to-centre dimension is reported as 1.82m. The spans are respectively 9m, 66m and 13m, giving an effective span-to-depth ratio of 36:1, which is high even for a pedestrian bridge.

The two relatively short end spans help to "clamp" the centre span. The bridge deck is therefore tied down at its ends using hinge links, and sits on the intermediate support piers via elastomeric bearing pads. Tuned mass dampers are hidden below the deck to reduce vibration, and the bridge was vibration-tested by groups of up to 25 people during construction.

The deck level is raised relative to the bottom of the girders, presumably because otherwise the upper chord of the girders would be visually intrusive. The walkway is separated from the girders by a balustrade in the form of a metal grille.

The H-section configuration of the girders means that the outer and inner surfaces are a series of recessed boxes defined by the overlap of the chord and web member flanges. On the inner face, the lighting units are tucked away into the recess at the top of the girder webs.

The detailing is exceptionally simple, but I found it considerably more satisfying than the more normal hollow-section Vierendeel truss footbridge, which presents a featureless face to the world. The arrangement of the H-sections is logical in resisting in-plane bending moments.

For me, the colour is a slightly odd choice, being a grey-green with a slight hint of the military to it (see, for example, "Panzer Olive Green"). It's preferable to the conventional pale grey of so many bridges, but only just.

I can't quite work out what's going on with the timber flooring. There are five rows of bolt-heads clamping these to steel stringers running below. there are also two steel durbar plates, one on each edge. Can anyone tell me what these are for?

On the whole, I find this a bridge to admire rather than necessarily to like. Rigour and logic always have a certain appeal, but it's a blank, steely-eyed, inexpressive sort. I don't think a spot of real colour would have gone amiss, and the bridge geometry would have lent itself to something subtly Mondrianesque, perhaps. 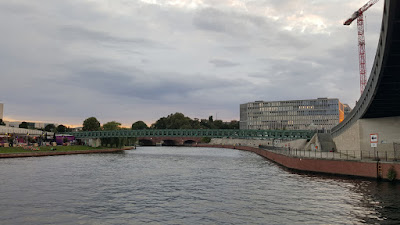 Posted by The Happy Pontist at 9:02 PM

Does the durbar match axle widths for maintenance or emergency vehicles?

The running plates seem be a retrofit as they don't appear on original pictures. Maybe they are to strengthen the timber decking for an increased or inadequate assessment patch load, or they could be to accomodate light maintenance vehicles?