I'm often puzzled by how people view groups of bridges, even people who nominally specialise in their study or documentation. This is the next bridge in my eastward journey along Berlin's River Spree, and it's a significant structure with a complex history. But you won't find it in a book like Berliner Brücken, nor is it listed on Wikipedia amongst fellow Spreebrücken. What crime has it committed, to be so left out? Very simply: it's a railway bridge, such a lowly beast that for some people, it seems it may as well not exist.

It's quite a significant railway bridge as well, carrying tracks westwards across the river from Friedrichstrasse railway station. What can be seen today is an amalgamation of three phases of construction. The southernmost pair of arches survives from 1882, and is in wrought iron. The northern arches date from 1923, in riveted steel. The central section of the bridge was replaced in 1997 with arches in welded steel.

The 1882 section features two-pin arched girders, constructed by lacing together the girder flanges with diagonal web members. Vertical spandrel struts are splayed out at their base to enhance stability. It's a straightforward and effective design, and in my view the most visually attractive face of the bridge.

The 1923 part is less visually appealing. The arch ribs are riveted box girders, stiffened externally. The cantilevered deck has a less "clean" appearance than on the south side, with visually obtrusive cantilevers breaking up its linearity.

A pedestrian bridge has been inserted into the north part of the bridge. This allows pedestrians to cross the river, or via a series of staircases to access the railway platforms above.

It seems like a neat idea, but in practice it's like sticking an underpass through the belly of a mechanical whale: gloomy, unattractive, and slightly squalid. Fascinating for an engineer, perhaps, but unsuitable for many potential users. 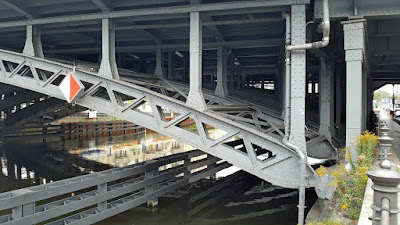 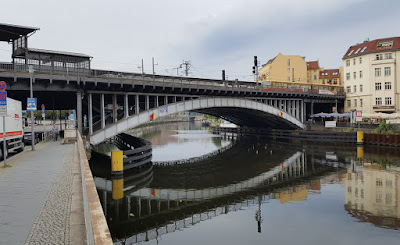 Posted by The Happy Pontist at 7:26 PM