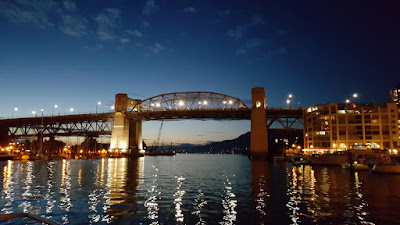 The next two bridges that I'll feature from Vancouver both span False Creek, a significant water inlet which separates Downtown Vancouver from parts of the city to the south and south west.

I saw both bridges on an evening dinner cruise, so my photos are quite limited.

Burrard Street Bridge (a.k.a. Burrard Bridge) is the oldest surviving bridge across False Creek, completed in 1932 to a design by architect George Lister Thornton Sharp and engineer John Robert Grant. Grant was a structural engineer with experience in both the USA and Canada, who had first proposed a bridge at this site in 1910, and who later went on to design the nearby Granville Street Bridge. Sculptor Charles Marega also worked on the bridge, and would later design the lion sculptures that gave Lion's Gate Bridge its name.

The bridge supports a five-lane highway, a cycleway and a pedestrian walkway. The centre truss span is 90m long. The most prominent feature is the towers, designed in an art deco style in exposed concrete.

These have an architectural significance well beyond their simple role in holding up the main span. They act as giant bookends, distracting the eye from the very different span forms on either side: a curved truss above deck in the centre, and deep, flat trusses below deck on the approaches. See also Sydney Harbour Bridge, completed in the same year, for a similar solution.

It isn't clear from the river view, but the towers also form wide portals, with windowed internal galleries. As well as acting as gateways, the architect specifically intended these to block views of the overhead truss bracing, clearly considering it unsightly.

An extensive programme of repairs, strengthening, modifications to the non-vehicle lanes, and installation of anti-suicide fencing has just been completed in October 2017. From my photographs, you barely see the fencing, so it hasn't marred the bridge's appearance too much.

It's a nice bridge. The art deco style has generally worn well, with a degree of regularity and restraint that doesn't look too ridiculous even in the modern day. 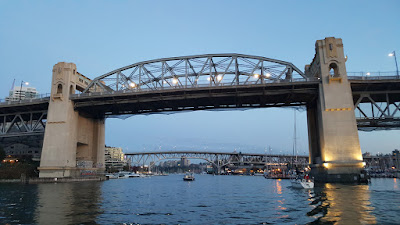 Further information:
Posted by The Happy Pontist at 9:48 PM