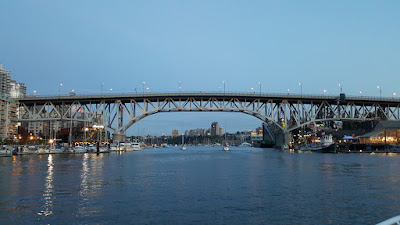 Granville Bridge is the next bridge east along False Creek in Vancouver after the Burrard Street Bridge.

Completed in 1954, the 1.1 km long bridge carries eight lanes of highway traffic and two footways between Downtown Vancouver and Granville Island (and beyond).

It is the third bridge on this site, with a timber trestle bridge erected in 1889, replaced by a steel truss bridge in 1909. Both structures incorporated swing spans. 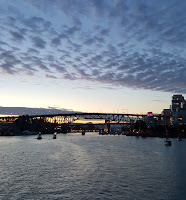 The current bridge was designed by engineer John Robert Grant to sit at a significantly higher level than its predecessors, eliminating the opening span and thus accommodating much higher traffic levels. Pressure for change had no doubt been partially addressed when the Burrard Street Bridge was completed in 1932 (also designed by Grant).

Granville Street Bridge lacks the architectural attention that was devoted to its Burrard street neighbour. The main span is a conventional steel cantilever truss, notable only for the main span truss being significantly less deep than the approach span trusses, which didn't have to respect the same shipping clearance. This looks more than a little odd, but it's understandable given the need to reduce the overall length of the structure. The side spans are seen less clearly, with a background of buildings, so I imagine the odd relationship simply isn't apparent to any casual observer.

Although the design is pretty much entirely engineering-led, it's not unattractive or inappropriate to its setting. It is rational, orderly and from most viewpoints, uncomplicated.

Proposals have recently been made to add an elevator where the bridge passes above Granville Island. 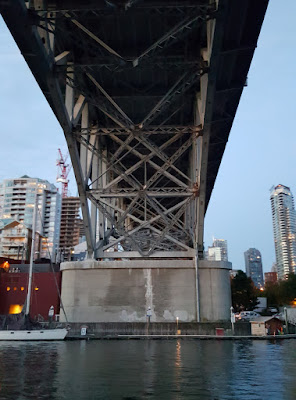 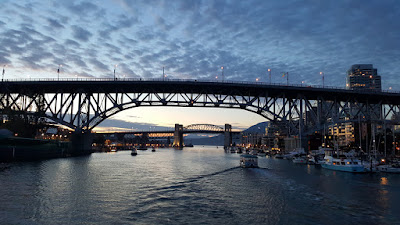 Further information:
Posted by The Happy Pontist at 9:12 PM