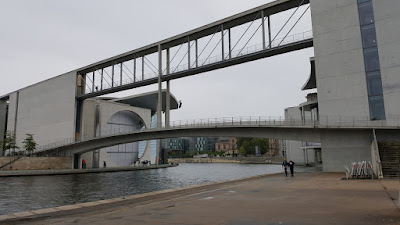 Continuing our journey eastwards along the River Spree in Berlin, the next bridge we come to is the Marie-Elisabeth-Lüders-Steg.

This twin-level bridge was designed by architect Stephan Braunfels as an adjunct to the adjacent parliamentary buildings completed in 2003. Structurae states that the wide lower deck is a 62m long prestressed concrete box girder structure; the narrower upper deck is evidently a steel truss. The actual main span is only 36m.

The bridge doesn't appear to have an official name, borrowing its normal title from the adjacent Marie-Elisabeth-Lüders Haus, home to German parliamentary offices, meeting rooms and library. (Wikipedia suggests it may be officially titled the Jakob-Mierscheid-Steg).

The lower walkway is open to the public, but the upper floor is private.

According to Berliner Brücken, the columns which appear to hold up the upper truss are not actually connected to the lower bridge in any structurally meaningful manner. That sounds unlikely, and my photographs don't bear it out: the columns are concrete, of course they sit on the lower span.

However, the whole bridge strikes me as a poor example of design. The truss members in the upper walkway are angled as if the bridge was designed to be entirely supported at its ends: they are not the correct way round for a truss span supported also in the middle.

I wonder whether it was originally intended as a single span, and then the additional columns inserted only when it became apparent the buildings either side couldn't hold it up.

I find little to like about the bridge, other than perhaps the paving and the uplighters.

I think it's a little depressing that such a muddled, dispiriting design could be sufficiently well-regarded to be built at such a nationally significant civic site.

Posted by The Happy Pontist at 9:07 PM