Bridge Awards for Mediocrity and Plain Old Terribleness - The Winner!

I announced the Bridge Awards for Mediocrity and Plain Old Terribleness (the BAMPOTs, for short) back on 3rd September. Twenty-two bridges were nominated by the blog's readers, and passed to a panel of bridge experts to produce a shortlist of the worst of the worst, which was announced on 1st October. The shortlist was opened up to a final public vote.

This convoluted process is of course just a way of getting myself off the hook ... I didn't nominate, shortlist or vote for any of these bridges, so don't blame me!

Anyway, the votes are in, the counting is done, and we have a winner!

Seventy-three people voted. In reverse order, the votes are as follows:

So what can be said about a bridge which won over two-fifths of our discerning audience (and, incidentally, which was unanimously the worst rated bridge by the judging panel)? (All photos courtesy of Victor Hermida Prada). 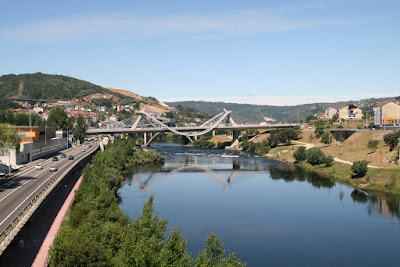 The nominator was anonymous, and said: "My vote goes to: Millenium bridge... in Ourense, Spain. I don't think it needs much explanation, just type 'puente del milenio ourense' in Google and the images will make clear why!"

It gets worse when you put it into its context! pic.twitter.com/jD8EAOWj0g
— Ana M. Ruiz-Teran (@anaruizteran) October 7, 2017 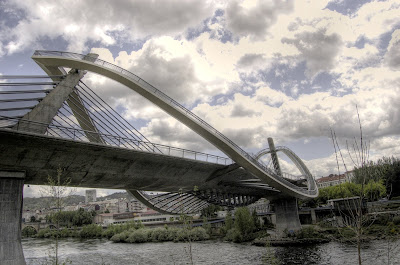 I think it is undeniably an awful bridge, and well deserving of recognition as this year's top BAMPOT. I'd echo all the comments from the third judge above - its largest offence is its ungainly combination of multiple geometries, none of them designed well in their own right, and worse when plastered on top of each other. The walkway gimmick gives the initial impression of being a suspension bridge, but instead it's the killer garnish that overpowers everything else.

It's a hard bridge to look away from, but only in the same sense as a car crash. I'd certainly love to visit it, and indeed the Ourense tourist office promotes it as a significant attraction, along with their other bridges. 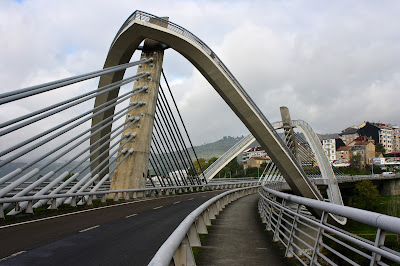 I'd like to thank everyone who nominated or voted for the BAMPOTs, and particularly the judging panel who showed sound judgement and also impressive endurance.

What do others think? Is the Ourense bridge a worthy winner? Do you think one of the other bridges should have won, and if so, why? Please use the blog page comments feature to provide feedback!
Posted by The Happy Pontist at 11:23 AM

It's even worse than it seems. Photos aren't able to show every aspect about its "terrific" design.