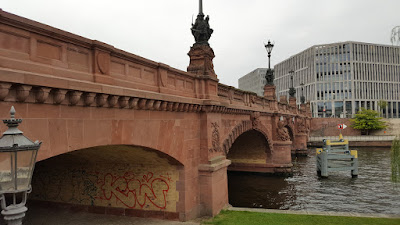 Heading east along the River Spree, the next bridge is Moltke Bridge (Moltkebrücke).

This is a bridge with a history. A timber swing bridge was constructed here in 1850/1851, but replaced with a multi-span wrought iron arched bridge in 1865, the Unterspreebrücke. That bridge only lasted until 1886/1887, and the present highway bridge was then built in its place, completed in 1891. The bridge is named after Prussian military commander Helmuth von Moltke, who died shortly before the bridge was finished.

The structure was designed under the direction of city architect Otto Stahn, who designed several of Berlin's bridges, most notably the famous Oberbaum Bridge. Stahn worked with urban planner James Hobrecht.

The bridge was the site of a battle between Russian and German forces in 1945, with the Germans detonating charges which damaged but did not completely destroy the bridge. The structure was rapidly restored after the war, with some masonry parts replaced in concrete. A comprehensive restoration took place from 1983 to 1986, including the insertion of structural steel strengthening members.

The casual visitor today would have little idea of the bridge's difficult past. Perhaps the biggest clue is the good condition of the sculptures and red Main sandstone carvings, many of which are replacements for damaged or lost originals.

It's no longer in fashion to decorate bridges in this way, which I think is something of a shame, as it links a bridge to the wider culture, and locates it as part of history. The Moltke Bridge is very well decorated, with carved faces above the crowns of the arch (the grumpy one pictured here is apparently Moltke himself), statues above the pier cutwaters, and carvings and statues at either end.

A damaged statue sits on the north river bank to one side of the bridge: I understand this has been left as a deliberate reminder of the damage that can be caused by war.

The various sculptures were originally designed by Johannes Boese, Karl Begas and Carl Piper, with the restorations by August Jäkel. I like the decoration on the bridge: it's dignified and slightly over-done, but neither gaudy nor kitsch. 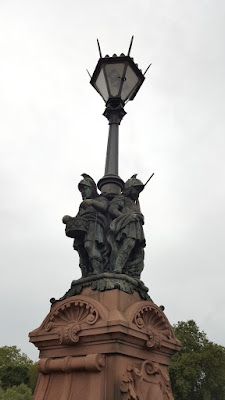 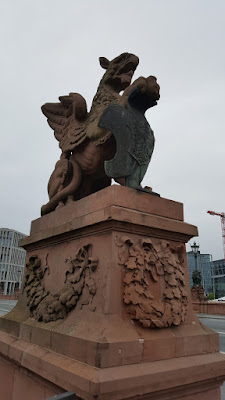 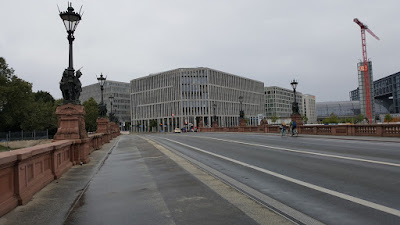