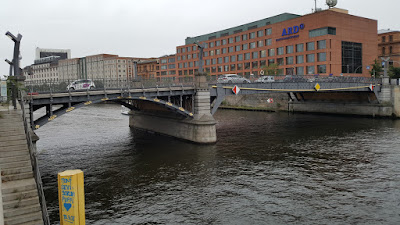 Here's another bridge which clearly displays the scars of its past.

The Marschallbrücke was built in 1882 as a three-span wrought iron arched bridge. The design is credited by Structurae to architect Albert Eduard Paul Gottheiner and by Berliner Brücken to engineer Friedrich Krause.

The bridge was damaged during the Second World War, and partially reinstated using steel girders afterwards. Due to its proximity to the Berlin Wall, it was not fully repaired until after the Wall came down. In 1999, the bridge was completely renewed to a design by architect Benedikt Tonon and engineer Gerhard Pichler. The reconstruction cost 12 million Deutsche Marks.

Tonon arranged for one of the original arch spans to be removed, and used as part of the Anhalter Steg, at the German Technical Museum elsewhere in Berlin.

The northernmost span was rebuilt, preserving its arches as supports to two footways on either side, thus retaining the appearance in elevation. Between these arches, the roadway is separately supported on concrete encased girders.

The southern spans were replaced with a new 39m long single-span structure, intended to improve river navigation. Again, encased girders carry the roadway, and a portal-frame structure carries the footways, reusing the original arch springings. There's clearly no chance of anyone mistaking new for old here, and that principle is central to the whole design.

The footway structures are separated from the highway by a simple metal kerb. This has presumably been judged sufficient to prevent accidental vehicle loading onto the footways.

The existing balustrades are ornate and well preserved.

The balustrades to the new span are very different, with an angular infill pattern which echoes the angularity of the structure below. There is a pattern to the lattice, with stiffer members in the form of repeating "X"s superimposed on the main lattice.

New lighting columns have been installed on the central pillars - I found these to be awkward, although perhaps awkwardness is appropriate at the juncture between old and new.

I admire the technical solution adopted, but I couldn't really bring myself to like the bridge. There is a sagging yellow line on the outer faces, perhaps to emphasise navigation requirements, and it feels like a real distraction to what would otherwise be a rigorous composition.

Posted by The Happy Pontist at 8:21 PM