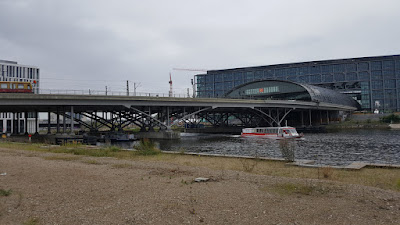 Taking a little detour, we continue east along the River Spree from the Gustav Heinemann Bridge, and then turn north into the Berlin-Spandau Ship Canal. The channel opens out here into the wide Humboldt Harbour, and is spanned by several railway tracks just to the east of Berlin Central Station.

The Humboldt Port Railroad Bridge, or Eisenbahnüberführung Humboldthafen, as Structurae has it, was built in 1999. It carries a significant stretch of railway - from here you can apparently travel to Paris in the west, or to Moscow in the east.

The 240m long bridge supports six tracks, and varies in width from 40m to 66m to accommodate the track layout on the station approach. This section is part of a longer series of railway viaducts around 1km long in total.

The bridge comprises prestressed concrete "T-beam" decks, 1.7m deep and spanning up to 25m onto steel column supports. Over the harbour there is a single 60m span, comprising steel arches. There are three viaducts running alongside each other, each curved in plan.

The arch ribs are steel tubes 660mm in diameter, made from 100mm thick plate. The detailing where the tubes support the deck is odd: there seems to be a thin concrete platform immediately below the main deck girders, with this platform element compressed by the arch tubes so that it forms part of the arch structure.

The bridge has pinned articulation at the supporting arch nodes, and also some of the tubular column supports.

The connections between steel tubes are made in cast steel, something rarely seen in bridge construction, and claimed here to be a first on a rail bridge (its use on a footbridge can be dated back at least a decade before).

Cast steel is usually seen as expensive, although is increasingly common in large buildings where the structural members are visible. It has considerable advantages over welded steel with regard to fracture resistance and fatigue, especially as sharp corners can be easily eliminated.

For the Humboldthafen Bridge, finite element analysis was validated with physical testing at the University of Karlsruhe, using tubes up to 508mm diameter and with walls 50mm thick.

I don't think it's an especially beautiful bridge. There are individual elements with nice detailing, but the junction of the arch and deck is very awkward, the two structural forms are superimposed rather than integrated. The hinges at the column bases and arch springings are not well expressed, and there are inconsistencies in the different types of cross-bracing applied. I'm not sure the cast nodes add a great deal visually, either.

Where it is successful is in how it unifies the arch and beam/column parts of the viaduct, a combination of systems which could otherwise have been very disjointed visually.

Is it possible the 'thin concrete platform' allows for slightly taller boats to pass underneath the bridge?