The next bridge upstream from the Ness Bridge is a sibling to the Greig Street Bridge, built in the same year (1881), designed by the same engineer, but with a number of subtle differences. 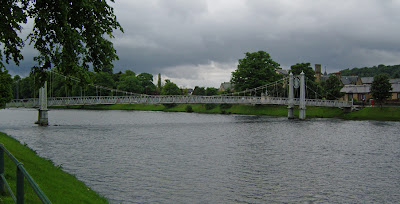 The design is credited to C R Manners, and a plate on the bridge credits W Smith and Sons, Ness Ironworks, although I note that Civil Engineering Heritage credits Rose Street Foundry for both bridges.

The main span is 61.0m, marginally shorter than at Greig Street, while the two back spans are significantly shorter, at 12.8m instead of 20.4m. I can't say that they look particularly different as a result. The main cable passes slightly higher above deck level, but that's about it. 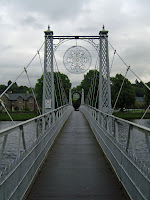 Both bridges have slightly tapered, banded cast iron piers. The towers have a similar, but less dense, lattice than at Greig Street, and the arched tower portal members are both less sturdy and less ornate. 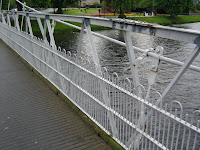 The deck trusses are similar to its sibling, although appear to be original rather than having been replaced in welded construction.

As at Greig Street and some other Inverness bridges, there's a low-height railing to provide pedestrian containment. 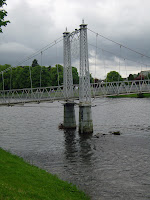 The most significant difference between the two bridges is that the Infirmary Bridge features tie-down cables below deck adjacent to the piers. I presume these were added at some stage to reduce horizontal and/or vertical movement of the deck.

It's not by any means a great bridge, but it's a slight cut above many of the similar pedestrian suspension bridges which were built in the early 20th century. I think it's aesthetically superior to the example at Pitlochry visited earlier the same day. We visited a few more later on the trip, so I'll compare those later.

Posted by The Happy Pontist at 9:35 PM