From Broomhill Bridge, we drove back towards the A9. On the way, we stopped in the tiny village of Carrbridge. The name is a clue: this is a village of a thousand picture postcards and holiday snaps, all of the same landmark. 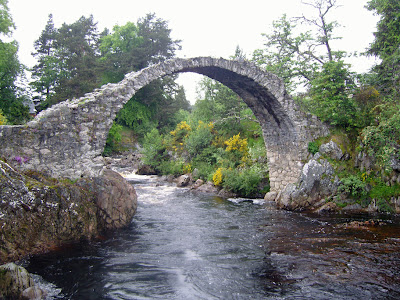 The Carr Bridge itself dates from 1717. It was built by a stonemason, John Niccelsone, reportedly for the sum of £100. 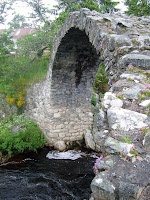 Supposedly, it was built as a "funeral bridge", to allow coffins to be carried to a burial ground. I have to say I think that is somewhat unlikely. This is the oldest bridge over the River Dulnain at this location, and it seems hard to believe that a bridge wouldn't have had commerce and general transportation as its main objective. 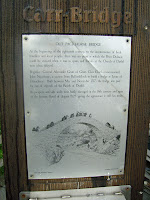 Only the masonry arch ring now survives, with any parapets and surfacing long gone. What remains is just over 2 metres wide, not that we were foolhardy enough to measure it. My companion was happy to chance the span, but I took the side of prudence. An information sign at the bridge includes a sketch showing how the bridge may once have looked.

The bridge's remains are particularly picturesque, both for the slenderness of the arch, and for its semi-circular profile.

Posted by The Happy Pontist at 9:48 PM

Thanks for posting photos of this - it's perhaps even more beautiful in its decline, handrail and parapets always seem to spoil bridge elevation!

No doubt your companion quickly estimated his self-weight, knew the stone's weight from standard tables and mentally calculated the line of thrust before judging it within safe parameters and crossing - impressive mental agility...!

It was simpler than that - the bridge has certainly supported several other people in recent years, and my companion rightly judged himself to be no heavier than likely past users. On visual examination, it appeared unlikely that the bridge condition had changed for the worse since it was last used ...