Heading south along the River Ness, the next bridge after Greig Street is the Ness Bridge. A series of wooden bridges first occupied this site. A seven-span masonry arch viaduct was built here in 1685, but washed away in a flood in 1849. It was replaced for £26,000 by an asymmetric suspension bridge, designed by J.M. Rendel, with a massive masonry tower at one end. This was thought to be less susceptible to flood damage, but the towers were so massive that there was barely any room for vehicles to pass through their portals. Consequently, in 1961, the bridge was replaced again, at a cost of £250,000. 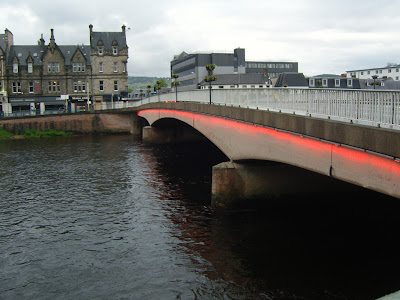 The current bridge is a three-span prestressed concrete structure. Two 19m side spans frame a central span of 36.6m. The central span in turn comprises an 18.3m "drop-in" section, supported on two 9.15m cantilevers. The designer was Sir M. MacDonald & Partners (now part of Mott MacDonald), while the contractor was Duncan Logan Ltd. 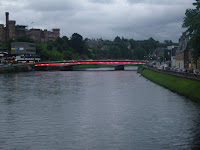 The concrete elevations have been bush-hammered, presumably to give a more even appearance. 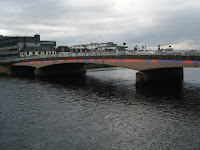 It's a very fine example of this type of bridge. The shallow curvature of the soffit is such that the presence of the drop-in span is well disguised, and I find it visually very attractive.

A lighting system was added to the bridge in 2008, and is simple but effective. We saw the bridge on an overcast evening with a heavy-flowing river; I imagine it looks splendid in clearer weather and with calmer, more reflective water.

I'm writing a novel set in Inverness and although I grew up nearby, details of certain things evade me! Thank-you for your beautiful bridge blog, very helpful. Vicki