From Dunblane, we drove to Callander. This town nestles among the hills and glens of the Trossachs, a particularly beautiful part of Scotland. Above the town, a river cascades down through a forested gorge, most spectacularly at the Bracklinn Falls.

The Falls are a fairly straightforward walk from a forest car park behind Callander Golf Course. The path previously crossed the gorge above the falls on a small metal bridge, but this was destroyed during a flood in 2004. A new bridge, designed and built by the marvellously monikered Strong Bridges, was completed in October 2010, at a cost of £110,000. In 2011, it was Highly Commended in the international Footbridge Awards. 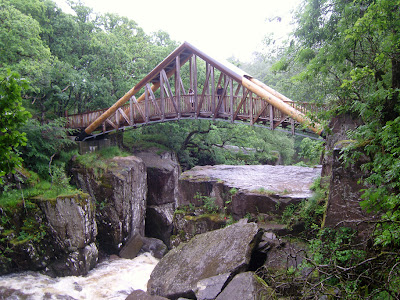 Building a new bridge at this site must have been no mean feat. The waterfalls are dramatic, the gorge drops steeply below the site of the bridge. Access is via a forest track. 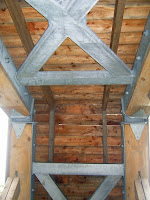 Accordingly, the bridge uses mainly materials that are widely available locally i.e. timber, and is in a blindingly simple structural form. Four 12m long Douglas Fir trunks form the main structural members in an A-frame truss arrangement. The central part of the bridge is roofed in copper sheeting, which helps obscure the presence of steel bracing at the truss crown.

The bridge was installed by winching it across on greased metal tracks supported on a temporary timber structure. 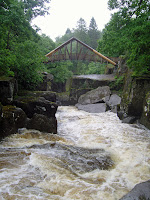 Before visiting the site, I'd seen pictures of the bridge and not thought it to be particularly successful aesthetically. The triangular truss shape seemed just too basic, too primitive. If the bridge were somewhere else, this might be true. Perching precariously above the Bracklinn Falls, however, it works extremely well, like a giant punctuation mark emphasising the centre of the Falls, and the experience of being able to stand at such a remarkable position.

It's one of those sites which is hard to do justice to with a photograph, hard to really get a good point-of-view that makes clear how the bridge relates to its context. So, in a first here at the Happy Pontist, here's a short video:


Even with the video, it's hard to really understand what a dramatic and beautiful site this is. To find out, you have to go there, and it's certainly worth doing that if you're anywhere near Callander. 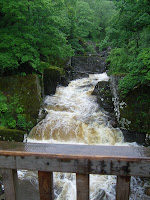 Below the bridge, the gorge drops deeper than the photos here suggest. There had been heavy rainfall before we arrived, so the river was particularly full, and the view from the bridge was very impressive.

The tree-trunk bridge members gave a feeling of great security - unlike some of the bridges I'll cover later in this series, there wasn't a hint of vibration or insecurity. 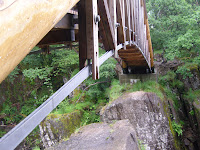 The load from the bridge is carried by the massive main timbers, but their thrust is restrained by curved tie members below the deck. These are steel plates, two on each edge of the bridge, and shaped with a gentle scalloping between points of connection.

This is one of the bridge's more attractive features, the fact that the tie is curved rather than straight, visually shrinking upwards and away from the peril of the waterfall. 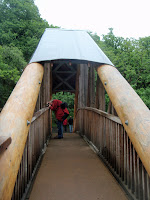 With a site like this, there are always a number of difficult issues to consider when evaluating a bridge.

If the bridge is visually successful, is it actually the case that the waterfall would render almost any bridge a success? I'd say no: the triangular form responds particularly well to the function of the bridge as a viewing gallery.

Would the natural scenery actually be better off without a bridge? Again, no: it allows access to views that would otherwise be impossible, and it doesn't diminish the views of the falls from other perspectives.

Would the same bridge look just as good in a different setting? Yet again, no: this bridge is clearly of its place, and might in fact look quite horrible in a number of other locations.

I believe the bridge has been a great success in attracting visitors, and it was certainly quite popular even on the rainy Saturday morning when I visited. It's great to see that a dramatic, structurally unusual landmark pedestrian bridge needn't be the stereotypical jumble of steel tubes and wires that is so often the case. This is a bridge that's highly appropriate to its site, was clearly economic to build, and well-deserves wider recognition. 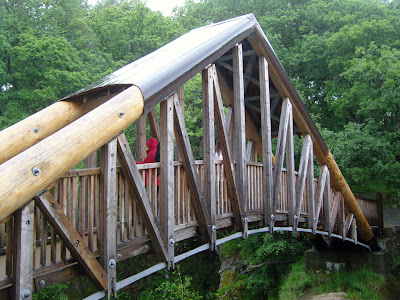 Not sure if you have seen Mr Strong's blog.