The A9 highway which used to run over the Findhorn Bridge now runs immediately north of the Findhorn Railway Viaduct.

The A9 highway viaduct was completed in 1976. Finding information on the bridge online has been almost impossible, but an old issue of The Highway Engineer reveals that it cost about £2.5m, and employs about 1,440 tonnes of weathering steel in its eight girders. The consultant engineer was W A Fairhurst and Partners, the main contractor was Whatlings Ltd, and the steelwork fabricator was Fairfield Mabey. 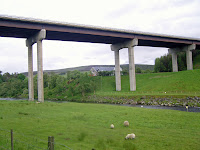 It was the second weathering steel bridge to be built in Scotland (the first was in 1973 at Seabegs near Stirling). Fairhurst designed three other bridges in the same material on the A9, at Slochd Beag, Nairn and Dulnain.

There's quite a nice picture of the bridge in the Corus publication Weathering Steel Bridges. This does indicate some rust staining of the piers where water is running off the girders. The bridge has apparently also suffered problems with its deck drainage, which was originally via gully pots into down pipes which discharged 150mm below the girder soffits - wind blown spray back onto the girders allowed chloride-contaminated water to damage the girder bottom flange. Water also became trapped near bearing stiffeners, causing further corrosion damage.

As with its neighbouring railway viaduct, it's remarkable how modern the A9 bridge looks. Not only are the deck lines very clean and straightforward, but the bridge piers have also been very well shaped. They are in the form of reinforced concrete twin-legged hammerheads, with both the legs and crosshead heavily chamfered, presumably to give an impression of slenderness.

, recommends avoiding hammerhead piers, as the end of the crosshead can become visually prominent, and "visually attach" to the superstructure, making the bridge seem thicker overall. This is less of an issue for tall piers, such as those at Tomatin.

Overall, this is an excellent bridge. We (the bridge design community) are still designing far worse structures today, some 36 years on.