This was the first bridge visited on my recent tour of Scottish bridges.

Conditions didn't bode well. Rain had been falling heavily since the previous day, and I was worried that I'd end up with poor photographs everywhere I went. As it turned out, they aren't too bad. 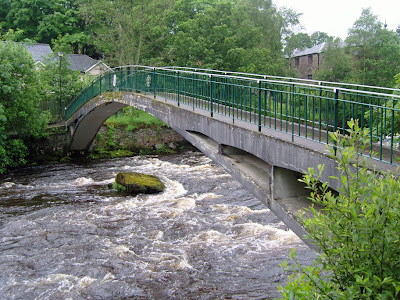 This reinforced concrete arch footbridge was built in 1911, and connects two areas of parkland across the Allan Water in the small Scottish town of Dunblane. It was designed and built by Considère and Partners, an early pioneer of reinforced concrete design in Britain. Reportedly, the name "Faery Bridge" is a corruption of "Ferro-bridge", from its use of "ferro-concrete".

The structure is in the form of a deck-stiffened arch, with a very slender arch member designed to carry only axial load, and a substantially thicker deck member which carries any bending from out-of-balance pedestrian loads. As well as the visual benefit of having a more slender arch, this design considerably reduces the cost of temporary scaffold centering, which only has to support the weight of the arch itself. The arch, once cast, then supports the weight of the remaining construction. 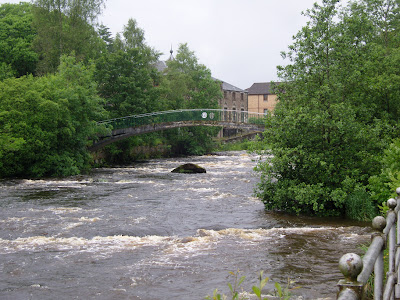 Perhaps the most famous example of this form in footbridge construction is Robert Maillart's 38m span Töss Footbridge, in Winterthur, Switzerland. Of course, Maillart's bridge wasn't built until 1933. This is something of a challenge to the normal historical perspective: Maillart is much-lauded as an innovator, and his bridges regarded in many cases as masterpieces.

The Dunblane bridge, meanwhile, is largely unknown and unheralded.

In their book on Scottish civil engineering heritage, Paxton and Shipway suggest that Maillart may have drawn on the example of Faery Bridge to influence his own work. Is it likely that he knew of the Dunblane bridge? The two authors don't offer any evidence, but Maillart's firm did apparently hold a license to Considère's patents in 1912, according to an advert in Schweizerische Bauzeitung. It's certainly not impossible, therefore, that Maillart had found out about the Dunblane bridge. During the 1920s, Maillart designed several deck-stiffened arches before completing the Töss bridge.

Maillart's use of this form has been much praised by David Billington in his various books, while acknowledging that the deck-stiffened idea itself dates back at least to the 19th century. Was Maillart merely plagiarising Considère? 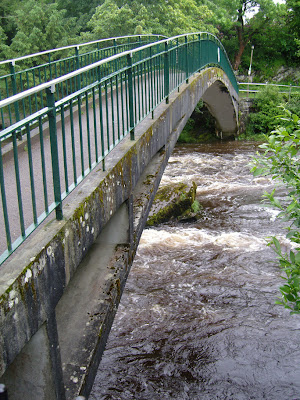 So far as I can tell, Faery Bridge isn't even Listed, which would appear little short of criminal, if true. In fairness, it isn't quite as outstanding a bridge as Maillart's one, with the arching of the deck over each bay detracting from the simplicity of the whole. The arch itself is also less slender than Maillart would achieve. Even with a swollen river rushing below, I'd find it hard to describe the Dunblane span as particularly dramatic or beautiful. However, it does seem technically remarkable, and it's hard not to think how much better known it would be had it been built in a different setting, by a different engineer.