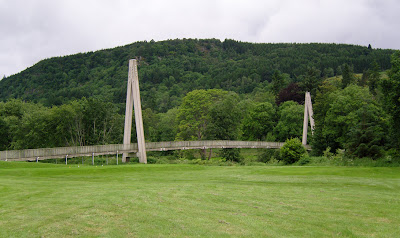 We were stopping in Aberfeldy to see the Aberfeldy Footbridge. Built in 1992 to connect two parts of a golf course over the River Tay, this was the world's first all-plastic footbridge, and is probably still the largest such structure. It was a pioneering piece of engineering technology, and we were interested to see how it looked, and how it had performed after 20 years of life. 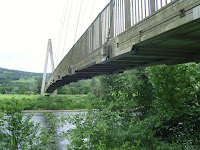 The bridge is a three-span cable-stay structure, with spans of 25m, 63m, and 25m. The span requirements were driven by river flood conditions. The towers are 17m tall A-frames, giving an inclined cable arrangement which helps stabilise the bridge deck laterally.

All main elements of the bridge were built in fibre-reinforced plastic. Glass-reinforced plastic, in the form of multi-cellular "planks" was used for the deck and the towers. The parapets are made from pultruded GRP sections. The cables are Kevlar, an aramid fibre, inside a protective plastic coating. 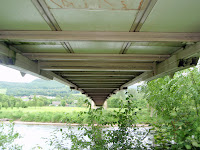 When built, the extensive use of reinforced plastic was promoted not just for its expected high durability, but also for its lightness of weight. This allowed the bridge to be erected by a relatively small team, using relatively straightforward plant, and no craneage. Indeed, the bridge was so lightweight that concrete ballast had to be hidden inside the deck to prevent any risk of wind-induced uplift. It's reported that the structural elements weigh in total just under 15 tonnes, which is very impressive.

In 1997, the bridge was strengthened by the addition of bonded GRP plates, following damage caused by taking an unauthorised vehicle over it. The bridge was originally designed for a uniform pedestrian load of 3.5kN/sq.m and had never been designed to carry the intense local loads from any size of vehicle. 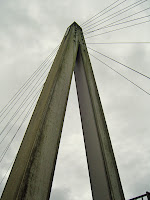 One of the difficulties with GRP bridges is that they do tend to be assembled from a kit of parts, as at Aberfeldy - standard panels and sections bolted or glued together to form the final cross-section. The deck edge beams, for example are made from five standard square sections glued to each other. This considerably limits the scope for aesthetic consideration - GRP bridges tend to look simplistic and blocky, like something that could be made from a child's modelling toy.

The Aberfeldy footbridge doesn't suffer too greatly from this problem, and to a large extent I think that's due to careful consideration of the overall form, with the gently curved deck and simple tower profiles drawing the viewer's attention. Close-up, some details appear clumsy, but little more so than on a timber bridge. 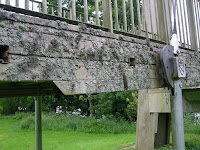 The bridge appears to have weathered well. A paper by Stratford (presented at Structural Faults and Repair this year) provides a detailed assessment, and notes issues such as impact damage to the deck and parapets. I didn't notice those, but did observe that the bridge has provided a very attractive platform for moss and lichen. I doubt that they cause any damage. Some deterioration of the resin surface of parapet sections, exposing the internal fibres, has also been reported.

The bridge parapets have clearly not been as successful, mainly due to a fairly simplistic fixing detail at their base where they are chased through the deck and secured in place by dowels. They rattle as the bridge moves, and can be shaken very noticeably by hand. Here's a (very) short video:


The bridge deck itself is very easy to excite into vibration. This is one of the biggest disadvantages of a lightweight structure, and the ballast on Aberfeldy Footbridge is nowhere near enough to prevent it (the design live load is roughly three times the design dead load). As a private structure, the bridge was never designed to satisfy normal pedestrian bridge vibration criteria, but I was still surprised to see how flexible the deck is. A single person can excite quite large amplitudes of vibration.

The first vertical frequency of the main span has been measured previously, with values of 1.59 Hz (1995), 1.52 Hz (2000) and 1.49 Hz (2011) reported in various papers. A damping ratio of between 0.84% and 0.4% has also been recorded. My little smartphone makes no claim to be an accurate vibration monitor, but I used it to take my own readings, the output of which is pictured below (as with all images, click for a larger version). This confirms a vertical frequency of roughly 1.5 Hz.

As a highly innovative prototype structure, it's remarkable that there is actually so little wrong with the Aberfeldy bridge. It's startling to realise that two decades after its construction, it remains unparalleled in its extensive use of reinforced plastic materials over such a long span. And finally, it's pleasing to see that all that has been achieved with a bridge that doesn't look too bad, either. 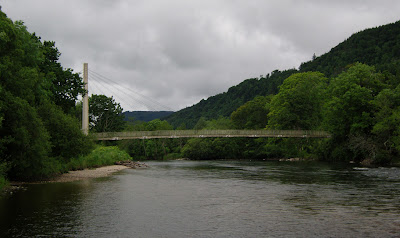 Given the current, rattling condition of the handrail seen in the video, I doubt it could carry the load even from a cyclist or a stumbling pedestrian.

The paper "A critical analysis of the Aberfeldy Footbridge, Scotland" presents a nice, detailed summary of the bridge, and states that the design load for the handrail was 1,4kN/m, and that the connection between rail and uprights was intended to be frictional - which assumes some "prestressing" of the screws.

It seems to me that tightening the screws might be helpful.


The lichens lend the bridge a "organic" and aged look. If it is not intentional, adding a simple coating during the next maintenance may be a good idea. Since it's a pioneering project, it should at least look attractive.


The role of the golf club also seems controversial: if they endeavoured into building a "first-of-its-kind", innovative bridge, which may also act as a landmark for the course, why letting it fall into such a condition? I don't mean functionally - the bridge seems to "do its job" well, but aesthetically and psychologically. By psychologically I think of the handrails that don't seem to offer any protection, and might even cast doubt on the reliability of the rest of the structure.
Or was the bridge built of GFRP/Kevlar only due to it's light weight and low cost?

Reference to "next maintenance" may be ironic. I don't believe the bridge has been maintained in any significant manner since it was built.

I think the attraction of the design to the golf course was two-fold: it was cheap, because much of the material input was subsidised, and it was largely built by unpaid student volunteers. Secondly, the prospect of low-maintenance costs. The difficulty of FRP is that while regular maintenance is avoided, major interventions can be very expensive.

If you think the handrails on this bridge are doubtful, I have a much better example of dubious parapets coming up in a few weeks time ...

what kind off application do you have indoor smart phone witch show XY and Z separently ?

thanks' again for this report in scotland

I use Accelerometer Toy on Android.