At last, we had reached the end of our first day's tour of Scottish bridges - Inverness. However, although this was the end of the journey, Inverness itself held several more bridges that we wanted to see (and many more that we wouldn't have time to get anywhere near). 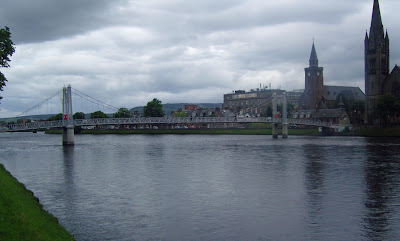 Heading south from the town centre, along the River Ness, the first bridge that we visited was the Greig Street Suspension Bridge. Built in 1881 for £1400, it is credited to the engineer C R Manners, and the local Rose Street Foundry. It's main span is 61.3m, and the side spans are each 20.4m. The piers below tower level are cast iron. 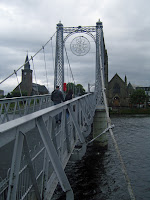 The bridge deck is stiffened by warren trusses on either side, with separate railings used for pedestrian containment. The form of the railings is shared by other Inverness bridges. The deck is described as iron in a number of places, but it seems rather obvious from the photograph on the right that it has been reconstructed in modern steel at some time. It's known that the cables were renewed in 1952, and the anchorages in 1989, but I can't find any information on when the deck was replaced. John Hume's photographs of the bridge taken in the 1970s, available on the RCAHMS website, show a different detail for the truss web members, so it has happened since then. Notwithstanding these substantial elements of replacement material, the bridge remains a Listed Building. 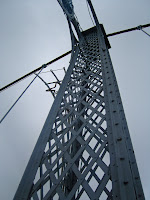 The pylons employ latticework which is much denser than normally seen on pedestrian suspension bridges from the same era. The ornate archways below the tower crossbeams are particularly attractive. As you'll see in a couple of posts time, there is a very similar bridge further upstream over the River Ness. However, I think the Greig Street structure is marginally the better of the two. 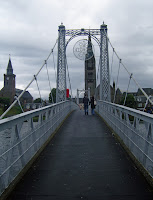 The positioning of the main cables is interesting, as they splay out noticeably towards the anchorages. The hangers have a small inclination near the towers, becoming progressively shallower near the anchorages. You can see quite how shallow they become in one of the photos above, at the top right. Visually, it helps to open up the entrance to the bridge, giving it a more "welcoming" appearance. I haven't seen it in such a pronounced way on similar bridges. 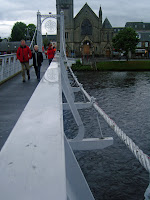 One oddity of the hanger arrangement is that they actually reverse inclination at midspan. Everywhere else, they incline outward, but in this location they incline inwards, requiring the use of short extension stubs below the main parapet support members. I'm unclear exactly why they do this, unless it enhances lateral stability. The bridge certainly didn't strike me as prone to much pedestrian-induced movement.

The bridge is a key Inverness landmark, both an important pedestrian route, and part of a riverside promenade which offers views of local buildings, and of the hills beyond. 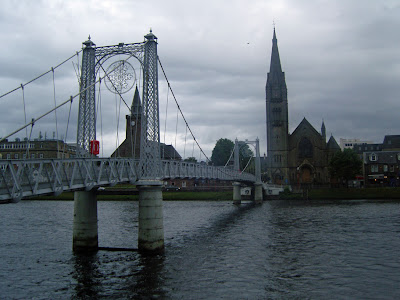 I was a fabricator/welder with Bone Connell and Baxter of harbour rd Inverness when we made the replacement hanging structure of this bridge approximately 1986. On completion of the final section in the workshop the three fabricator/welders welded their initials under the top rail upstream side at the town centre end. They were, Harry Jacob, Danny McGrath and myself Garry Lightbody.I donated a spool of photographs to the Inverness archive centre which I found in a drawer in the directors office when we were clearing the place after its closure in approx 1989.They were taken during the final days of erection before final painting and decking.