We left Aberfeldy, and went north to Pitlochry, to stop at a pedestrian suspension bridge which crosses the River Tummel. 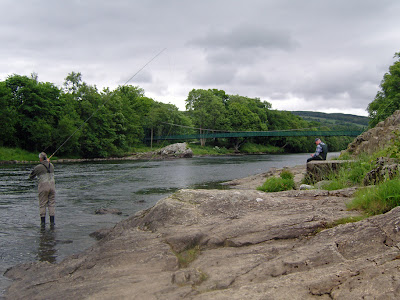 Built in 1913, this was the first of several suspension footbridges we'd visit over three days. It's also one of the longest spanning pedestrian bridges in Scotland. A plaque on the bridge states that it was "erected in memory of Lt. Col. George Glas Sandeman of Fonab, opened by the Marchioness of Tullibardine, on Empire Day 1913". Another plate notes that it was manufactured by the Lanarkshire Steel Co Ltd, using the Siemens Martin Process. 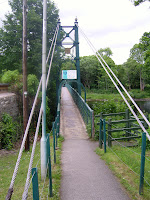 Lanarkshire Steel Co Ltd were based in Motherwell, and their name also appears on the Elvanfoot suspension bridge in Lanarkshire, which has a number of similarities, although with a significantly shorter span. The Elvanfoot bridge also bears the name "Rowell / London", and is very similar to yet another suspension bridge at Thames Ditton Island, which is known to have been designed and built by David Rowell and Co, so it may be that Rowell were also responsible for Pitlochry's bridge. All these bridges share similar lattice steel parapets, and lattice towers with an arched portal below cross-bracing, with similar finials atop the towers. I've featured a Rowell bridge here previously. 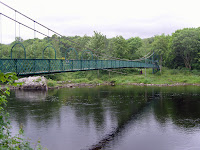 The Pitlochry bridge connects the main part of the town with Port-Na-Craig. It was originally built to replace a ferry crossing which dated back approximately eight centuries. Its span doesn't seem to be properly recorded anywhere but Hume (see Further Information, below), reports it as 250 feet (76m).

The latticework parapets are an economic part of this design. The lattice plates both provide the pedestrian containment as well as acting as a truss which stiffens the bridge deck against vertical displacement. As at the last bridge, the Aberfeldy Footbridge, I took a vibration reading on my smartphone: 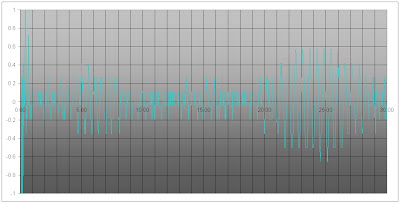 This shows the vertical vibration only. The frequency is about 1.7-1.8 Hz, certainly well within the range which is easy to excite, but the acceleration is much less than was the case for Aberfeldy. The Pitlochry bridge is straightforward to excite, but not to a point where the vibrations are unacceptable. 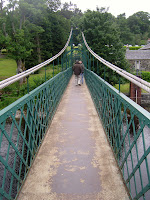 A sign on the bridge reads "For the comfort and convenience of other users, please do not cycle or swing on the bridge". While the bridge is reasonably steady, I wonder how much it could sway sideways, if it were not for the presence of tie-back cables on each side. These horizontal stays are visible on the last photo above, and clearly greatly reduce lateral motion as well as damping bridge movement generally. I presume they were added in response to the bridge's behaviour, rather than being an original feature.

One peculiar feature of the bridge is a series of arch portals connecting the two parapets, but only towards the end of the bridge. I'm really not sure what purpose these serve. Did the bridge have some kind of covering when first built? I'd be interested to hear ideas as to what these portals are for. 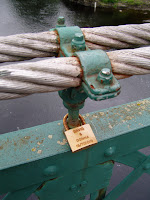 It's also interesting to note the cable arrangement. There are two cables on each side of the deck, presumably because for this span, single cables of sufficient diameter were not available. One benefit of the use of two cables is that the clamp arrangement for the hangers is quite straightforward, as can be seen in the photo. I didn't note how the hangers are suspended from the clamps higher up the main cables, where the clamp is at an increasingly steep angle.

As can be seen in the photo, the European tradition of "love-locks" has spread to this bridge, although I only spotted two such locks.

In old pictures there appear to be just two hoops at each end, although it's not entirely clear. Maybe they were put to deter mounted horses or stray giraffes?