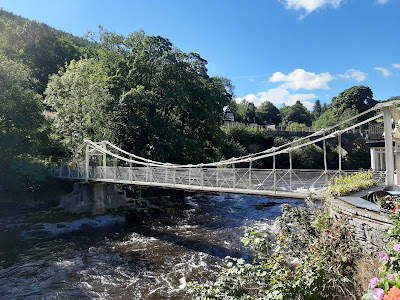 This bridges goes by a number of names - Berwyn Chain Bridge may be equally as appropriate. Signs at the site just call it "The Chain Bridge". It is neither a Listed Building nor a Scheduled Monument, which will only be surprising if you incorrectly imagine that our heritage bodies are competent.

The first bridge across the River Dee at this location was the work of local man Exuperius Pickering, variously described as an entrepreneur or a "coalmaster". Pickering was looking for a way to transport his coal and other materials between the Llangollen Canal (1808) and Telford's recently improved London to Holyhead Road, without paying tolls to cross Llangollen Bridge. Conceived in 1814, his bridge was completed in 1818.

This was a period of rapid development in cable or chain-supported bridges within the United Kingdom. Granted, the Winch Bridge, an iron chain catenary structure, had been built over the River Tees in 1741. However, it was the early 19th century when cable and chain bridges took off, with stayed bridges in Galashiels (1816), King's Meadow Bridge (1817) and Dryburgh Abbey Bridge (1817, rebuilt as a suspension bridge in 1818), and the Union Chain Bridge (1820, suspension bridge). Things advanced rapidly enough for Robert Stevenson to present an article surveying these and other designs in 1821, as well as proposing his own bridge at Cramond, an underspanned suspension bridge, which was never built.

Pickering's bridge sits right in the middle of this chronology. Happily for posterity, drawings of the bridge were made by the French traveller Joseph-Michel Dutens (see below). These show the bridge to be an underspanned suspension bridge, with eyebar chains supporting the deck, and an additional tension rod below this, perhaps to enhance stability. The bridges I mentioned above were well-reported, and it's often stated that Stevenson was the first to propose an underspanned suspension bridge, and James Smith's Micklewood Bridge (1831) the first to be built. In reality, Pickering got there first, although how much of an improvement his structure was over a simple catenary bridge might be doubtful.

The first drawing by Dutens shows half of the bridge (it was a three-span structure), while the second drawing gives cross-sections and details of the chains. A dozen chains passed below the bridge deck to provide support. 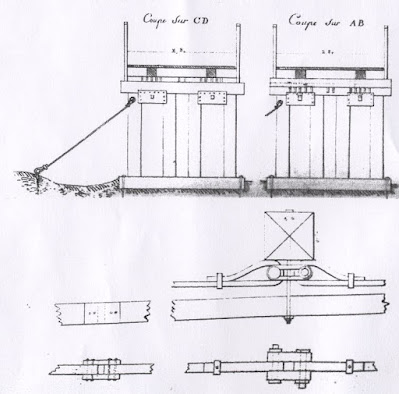 In addition to the drawings, photographs of Pickering's bridge survive, although showing it enhanced on one side by a timber truss. 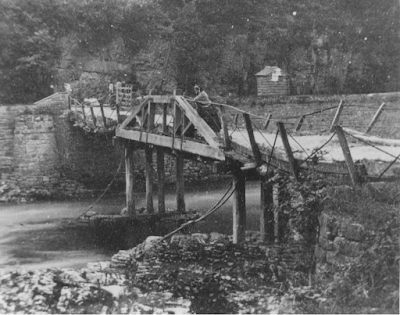 The bridge lasted remarkably well, until it became unsafe and was dismantled in 1870. In 1876, Henry Robertson, owner of Brymbo Ironworks, rebuilt the three spans and re-used the original chains, again adopting the underspanned system (photograph below). This one was destroyed in flooding in 1928. 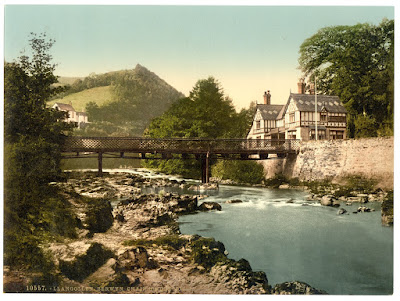 Roberton's son rebuilt the bridge the following year, but this time with only a single pier in the river. The chains were re-used, but now to form a suspension bridge, with three suspension chains on each edge, and two stiffening chains connected along the deck underneath. 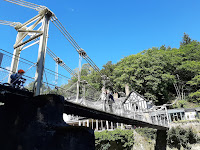 One tower sits on an outcrop of rock within the river, and the other on the river wall at the north edge. The river tower was protected by a large concrete pier, rendering the new bridge far less susceptible to flood damage. 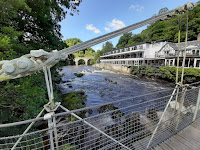 A pair of bars hang downwards from each chain link, and these are connected to a triangulated system of lower hangers. These in turn carry the lower deck chains and the timber deck.

The bridge was load-tested with 45 people when it opened, and lasted reasonably well, becoming gradually more dilapidated until being closed as unsafe in 1984. In 2014-15, it was completely refurbished, with all the metalwork carefully dismantled and then reinstated. 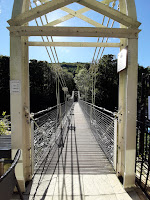 The works were completed by local firm Shemec Ltd to a design by consultants Ramboll. The engineers completed a careful structural assessment of the bridge, determining that even if corroded ironwork was replaced, it could not carry anywhere near modern loading requirements, being limited to 1.5 kPa of load. This equates to roughly 5 tonnes of load on the 24m main span, or around 60 people. Llangollen Town Council, who had taken over responsibility for the bridge, agreed that this was sufficient. Warning signs at the end of the bridge request that no more than ten people use it at once. 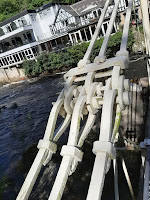 The reconstruction works are well documented in a paper by Ramboll and in photos on the Chain Bridge Project website. I'm not clear what proportion of the original metalwork was preserved and reused, but new pieces were fabricated in mild steel to match the existing details and dimensions wherever any piece could not be reused. All the chain pins had to be replaced. Nonetheless, in the rebuilt bridge it is claimed that these are the oldest bridge suspension chains in Britain to remain in use. 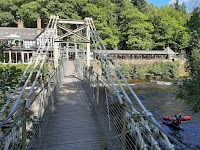 Prior to the refurbishment, there was no parapet remaining on the bridge. The reconstruction introduced a series of new parapet posts, a tensioned upper cable, and a mesh infill system. I'm not sure how well these match any parapet that had been there in the past, but I doubt the new system is compliant with normal modern standards. 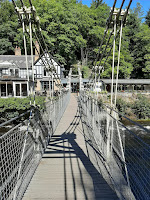 Indeed it's interesting to compare the refurbishment work at Llantysilio with what was done at Brabyns Park Bridge in Marple, which I discussed in a recent post. The chain bridge project is an exemplary piece of conservation engineering, where even though the structure is not Listed, it has been treated with integrity and the original details preserved as closely as possible. The engineers sensibly recognised that compliance with modern standards would have been entirely inappropriate. By contrast, the Marple structure is Listed Grade II, but senseless attempts to impose modern standards on it have largely ruined its appearance (although thankfully not irreversibly).

The Llantysilio Chain Bridge is unique both in the complex history of its surviving structural fabric, and in its form and details. It is well worth visiting, in a setting within view of two other fine bridges, and with plenty more to see within walking distance. 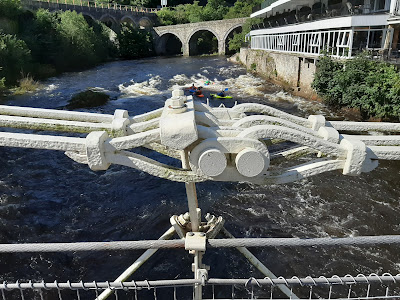