This bridge carries what is now a public footpath across the Breedon Cement works railway line in Hope. See my previous post for some background on the railway line. 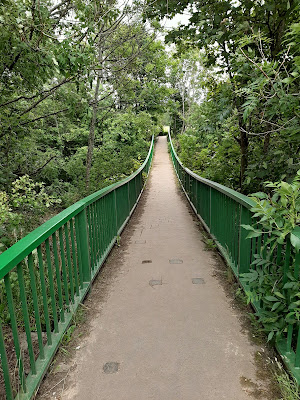 I haven't been able to work out whether this bridge, built in 1974, replaced an earlier bridge or perhaps a foot level crossing. Its construction may have been necessitated by the widening of the railway from one track to two tracks at this time.

It was the first stress ribbon bridge to be built in the United Kingdom, and I believe it remained the only one until the completion of the Kent Messenger Millennium Bridge in 2001.

The 1974 footbridge was designed by Oscar Faber and Partners (later merged into Faber Maunsell, now part of AECOM), and both A.A.W. Butler and Geoff Hope claim credit for the engineering design. It was built by A. Monk and Company.

Butler had worked on the Elephant and Castle Shopping Centre and the M1 Calder Bridge while at Gifford and Partners, before joining Faber in 1968. Bond had designed the Windsor End Footbridge for Buckinghamshire County Council, and worked on refurbishment of the suspension system for Marlow Bridge. He had joined Faber by 1969 and then worked for a time in Nigeria before returning to the UK to work on bridge designs for the Hope cement works (this one, and also the subject of my next post). Bond's potted autobiography is a hugely entertaining read, revealing that Bond's engineering career was essentially a mistaken diversion for a man clearly with wider interests to pursue. 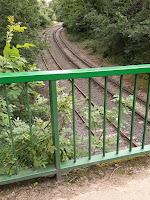 It isn't immediately clear why Butler and Bond opted for a stress ribbon design. In his 1977 paper describing the bridge, Butler suggests that appearance was of "paramount" importance in a sensitive landscape, and it is worth bearing in mind that the site was originally much more open in appearance than it is today. The cutting slopes rise around 6 metres above the level of the railway track, and rock is present close to the top of the cutting.

Butler indicates that interference with rail traffic during bridge construction was a further concern. The bridge spans 34m, is 1.8m wide, and is 0.16m thick (increasing to 0.38m thick over a short length towards the abutments). However, during preliminary design the design team considerd both an in-situ ribbon slab and one made of precast segments. The in-situ variant was chosen on cost grounds, but it's hard to see how it can have been less disruptive to the railway! 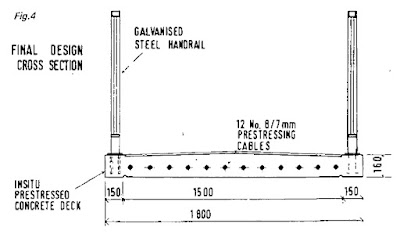 The superstructure of any stress ribbon bridge is economic in its use of materials (here it is just the deck slab, 12 prestressing cables, and steel parapets). The bridge hangs like a catenary and the cables are employed both to carry tension to the foundations and to pre-compress the deck concrete. The concrete provides the walking surface, protects the cables against corrosion, and ensures the bridge is sufficiently stiff under loads.

Although the bridge deck is economic, the tension loads inherent in the bridge form can result in expensive foundations. The tension is partly resisted by four ground anchors at each end of the bridge, but the designers struggled to provide sufficient restraint in this way, and opted to also install concrete struts which pass down the cutting slope and below the railway. In the final design as built, the struts, in conjunction with the mass of the abutments, are sufficient to resist all dead loads and the ground anchors are only required to resist the effects of live loads.

The in-situ concrete ribbon was constructed on timber formwork supported on scaffolding, with steel beam supports over the railway to minimise disruption. I imagine that very few stress ribbon bridges have been built in this way. 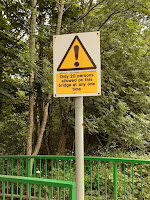 In 2002, the bridge was used as a test site for bridge dynamic measurement. This recorded a first vertical natural frequency of 2.44 Hz, and a modal damping ratio of approximately 0.5%. Vibration was certainly perceptible when I crossed the bridge, especially when I asked a companion to jump up and down. Perhaps this is the reason why signs restrict the bridge to no more than 20 persons at a time, although I doubt it ever encounters that many at one time (Butler's paper mentions a design live load of 6kN/m2, which is clearly far more than 20 persons).

The bridge was very difficult for me to photograph due to tree growth, so I can recommend Geoff Bond's website for photographs taken shortly after construction. 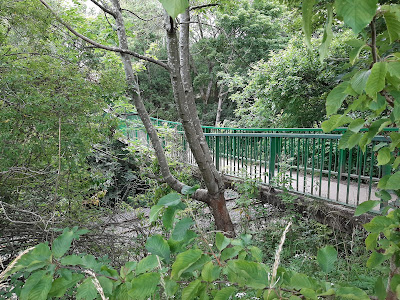 This is not by any means a significant bridge in the context of international stress ribbon bridges. Within the British context, the main reason for taking note is that its very rarity shows how difficult it can be for engineers to find opportunities to depart from the tried-and-tested. It's always nice to find the instances where engineers did indeed escape from the conventional rut.

Posted by The Happy Pontist at 8:28 PM

Hallo. My son gave me a tip on your interesting blog. He soon takes his exam from technical university, and can build bridges if he gets such a job. He made me fascinated for bridges. Your blog is very fine, small bridges, big ones, all are interesting. There is also an existential dimension in bridges, they connect people. In the Middle Ages it was seen as a good deed for God, to build roads and bridges because it helped pilgrims to reach their destination. Do you have a newsletter? Then I would like to subscribe. Sincerely Ingrid Kampas