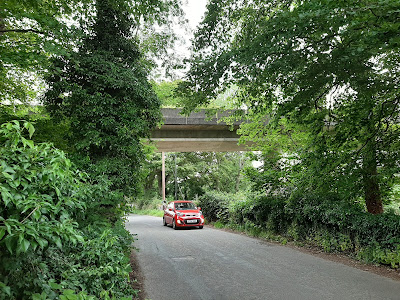 This is another 1970s structure built to replace one of the original bridges on the Hope cement works railway line (for context on the railway, see my earlier post).

The original 1929 bridge was a reinforced concrete trestle structure 347ft (106m) long, with eight spans of varying length. A 13ft (4m) wide deck slab spanned onto rail-bearers and crossbeams, which were supported from raised concrete girders on both edges of the deck. These then sat on reinforced concrete columns, braced with horizontal members to create H-frames.

The viaduct actually consisted of two structures, with a double-trestle in its middle and a copper expansion joint separating the two. The end trestles were buried within approach embankments, and will have provided stability against longitudinal loads from the railway. There is an image in Concrete and Constructional Engineering magazine which shows the finished viaduct: 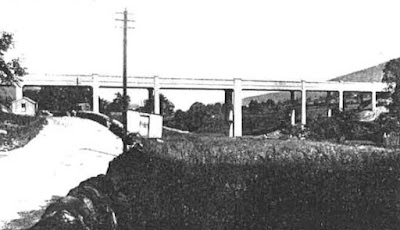 There is also a photograph on designer Geoff Bond's website showing the 1929 structure hidden behind the new bridge, presumably pending demolition. 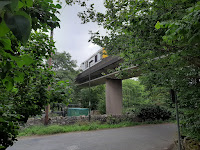 The present bridge is a 5-span post-tensioned concrete viaduct, carrying the railway over the Edale Road and the adjacent River Noe. I think it looks rather elegant in an artist's impression from 1973.

The main feature that makes it unusual is the way in which the lower flange of the box girder is extended outwards. Normally, such bridges extend only the upper flange (to form the road or railway deck), there is no obvious benefit to complicating things by extending the lower flange. Geoff Bond was a member of the design team at Oscar Faber and Partners, and his website indicates that the rationale was "to resist reverse bending moments and severe locomotive shear stresses".

I'm left slightly puzzled, and would love to have been able to find more information. 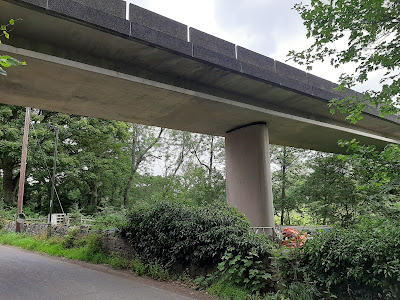