Many thanks to crisb who commented on my previous post about this bridge, drawing my attention to a number of publications from 1928-29 shedding further light on its history.

The bridge was mentioned on several occasions in the journal Ferro-Concrete: The Review of Reinforced Concrete. I believe this may have been promoted by L. G. Mouchel and Partners as a way of publicising the Hennebique system of reinforced concrete, for which they held the UK license.

The 117ft (35.7m) long bridge was described as having one 54ft (16.5m) central span, and two 21ft (6.4m) side-spans, sized to allow for future widening of the road. As well as being used in production of cement, the local limestone was crushed to form the aggregate for the concrete used in the bridges. Tests were undertaken to demonstrate that sufficient strength would be achieved.

The journal included this picture of the bridge under construction: 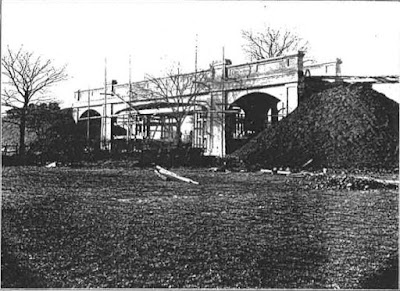 An article appeared in Concrete and Constructional Engineering magazine in 1929 on "Reinforced concrete bridges in Derbyshire". This noted the client as Messrs. G. and T. Earle Ltd., the owner of the cement works, and stated the design engineer as being Mouchel's firm. Messrs. F. Mitchell and Sons Ltd. were identified as the contractor.

This article confirmed the key dimensions of the bridge, also reporting that the structure comprises a 7.5" (190mm) thick reinforced slab, carried on 24" x 9" (610mm x 229mm) secondary beams at 4'3" (1.3m) centres, these supported from the main edge beams.

According to Ferro-Concrete, the completed bridges were "of most artistic appearance".
Posted by The Happy Pontist at 11:05 PM