Now here's a tale of woe.

Nathaniel Wright exemplified the manner in which the industrial revolution wrought huge changes on British Society at the end of the 18th and beginning of the 19th century. He made his fortune from coal mining in Derbyshire, and associated closely with other entrepreneurs such as Samuel Oldknow, who was the main driver behind construction of the Peak Forest Canal, connecting the Derbyshire coal mines through to Manchester.

In 1800, while the Canal was just finishing work on Benjamin Outram's Marple Aqueduct, Wright purchased the Brabyns Hall estate nearby. The estate lies immediately to the east of the Peak Forest Canal, occupying the land between the canal and the River Goyt. As one improvement to the estate, Wright commissioned Salford Iron Works to construct a bridge across the river, providing access to and from nearby Compstall village. The Salford firm's engineers James Bateman and Thomas Sherratt had previously in 1795 supplied a pumping engine for one of Wright's collieries. 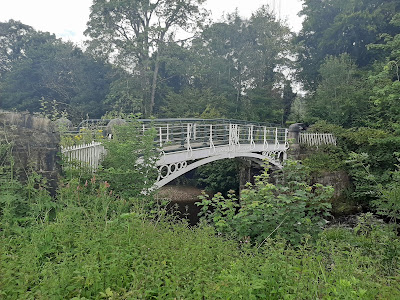 The new bridge was in the form of a cast iron arch, possibly the first such bridge in this part of England. The design was broadly patterned after Thomas Telford's 1797 Cound Arbour Bridge, with three cast iron arch ribs, each with a series of iron circles filling the spandrels. Variations on this theme were common, another example being the 1810 Tickford Bridge, but Telford had moved on, using the more rational diamond-pattern spandrels in his 1814 Craigellachie Bridge, for example. 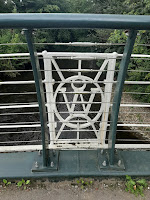 The bridge is decorated with the date and name of its maker, and the lightweight iron parapets feature an ornamental "W" in the middle, for the owner Wright, who died five years after the bridge's completion, in 1818.

So far as is known, the Brabyns Park span is the only bridge to have been built by the Salford Iron Works. It spans approximately 14m (46ft) and is 2.7m (9ft) wide. The central rib was cast in two halves, joined in the middle. The external ribs were cast in six pieces, with each half subdivided into three parts: an upper rib, a lower rib, and the circular spandrel elements. The arch ribs were stabilised by tie bars at their lower level, and by cross-bracing at the upper level. The original decking comprised timber planks.

In 1991, a structural assessment of the bridge labelled it dangerous, and a "temporary" bailey bridge was installed directly above it, remaining there until 2007, when the bridge was finally refurbished, following a lengthy campaign. Photographs of the bridge taken in 2007 immediately prior to refurbishment show the bridge to be horribly neglected, although how much of that was due to the difficulty of maintaining it with the bailey bridge in the way is hard to tell.

The bridge is Grade II Listed, but it was a lengthy battle to secure Heritage Lottery funding for its restoration, and then to agree exactly what works would be carried out. A design by engineers Scott Wilson Kirkpatrick (now submerged into AECOM) was eventually accepted after much debate.

In 2003, the campaigners had commissioned a report by local engineering lecturer and historic bridge specialist Tom Swailes. According to the report, the main issue with the bridge when it was closed in 1991 was the condition of the timber decking. Swailes took the view that:


"Future loads on the bridge will be no greater than the loads that it safely carried for 178 years. It is interesting to apply modern computer-based structural analysis techniques to old structures, but the results of such theoretical analyses must almost always be disbelieved unless verified by tests on the structure itself."

The subsequent involvement of "proper" consulting engineers seems to have been a curse. The designer's drawings proposed significant alterations to the bridge, over and above what may have been required for simple restoration. As Swailes noted in his report, despite its neglect the bridge had stood the test of time. 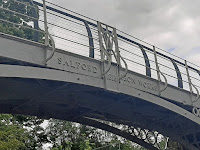 That was clearly not enough. The main structural alterations involved the bonding of steel plates to the central arch rib, the renewal of corroded bracing elements and the addition of new transverse bracing between the arches. These have relatively minimal impact on the appearance of the bridge, and you may struggle to see them on my photographs. In any event the underside of the bridge is not seen by most people, and is difficult to view even from the river bank.

The larger issues for the engineers (or for the technical approval authority at Stockport Council, perhaps), were the presence of a gas main, a small water main, and electric cables, which seem to have been previously laid on top of the deck planks; and the height and strength of the existing parapet railings, which were now judged to be inadequate. 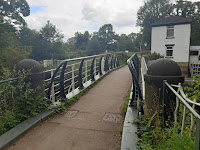 Measuring from the engineer's drawings, the original parapets are approximately 1.15m tall (although it will have been less when fill material had been piled onto the bridge decking to cover the gas main). This could not possibly do, the parapets had to comply with modern standards and be 1.4m tall (the modern requirement for cyclists). The solution to this, and also to accommodating the utilities, was to install new parapets connected to steel hollow sections sitting entirely on top of the existing bridge, with the hollow sections also used to contain the utilities.

The campaigners were evidently not very happy. On their website they indicated their regret:


"This means that in the future, perhaps with technological improvement or an enlightened approach to safety standards, or a combination of both, the modern intervention could all be removed and the old bridge will be revealed intact underneath."

No such technological improvement was ever needed: simply an "enlightened approach" that recognised that an existing historic structure could be considered to be perfectly acceptable whether or not it complied with modern standards. Nobody is going around rebuilding ancient castles (or installing 1.4m tall balustrades on the battlements) simply because the original builders couldn't foresee the stupidity of 21st century compliance-drive engineering culture.

Quite what the local planning authority, or English Heritage (now Historic England), thought is difficult to say. They certainly should have demanded that the engineers think again. Reading through the excellent restoration campaign website, one thing that jumps out at me is the absence of any mention of a specialist conservation engineer or conservation architect. The result, in my opinion, was deeply unfortunate.

The new parapets are painted a different colour to the original bridge, with a view to disguising them when the bridge is viewed from a distance. I don't think it succeeds: the elevation of the bridge is intact but the parapets are hard to miss. Seen from the perspective of crossing the bridge, the visual impact is much worse, essentially ruining what was a fine and historic structure. Reaching over the new parapets to push against the old ones, it seemed to me that the original parapets were quite strong enough.

The difficulty with hoping that this can be put right in the future is that not only was the opportunity lost at the time when funding was available, but that so much of the funding was seemingly unnecessary. It is perhaps unfair to criticise those involved when not in possession of all the information that they had, but at best the treatment of the Brabyns Park bridge is a crying shame, and at worst it's the inevitable but disastrous outcome of foolishness and incompetence.