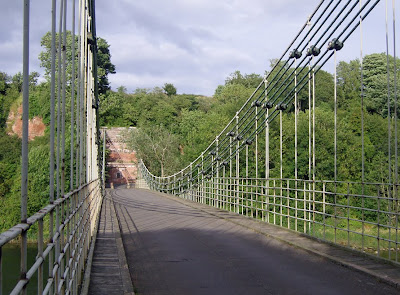 I recently visited the English/Scottish Borders area, and visited one or two interesting bridges while there, all historic structures. 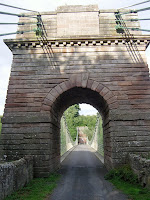 I'm calling the first of these bridges a "Northumbrian" bridge, although it's every bit as much a "Scottish" bridge, given that it spans the River Tweed across the border between England and Scotland.

The deck spans 110m and is 5.5m wide. The bridge has three chains of iron links on each edge, spanning 129m. The chains are vertically above each other, with the links staggered so that the hangers are evenly spaced. The chains pass over a masonry pier at the Scottish end, while at the English end, an abutment is built into a cliff face, with the chains anchored by a masonry arch buried within the rock. The difference in spans is because the deck reaches ground some way in front of this abutment.

Its survival to the present day is remarkable. Its designer, Captain Samuel Brown, mainly got into suspension bridge works as a way of exploiting the iron chain technology he had developed while in the Navy, and his very slender, unstiffened bridge decks were prone to oscillation in the wind. Most of his bridges have long since been destroyed. 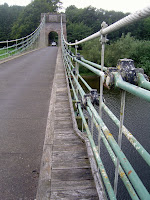 The Scottish tower looks particularly large and robust to my modern eyes, but that can be blamed not on Brown, but on John Rennie, who had helped the Berwick Turnpike Trustees to appoint Brown. Rennie described Brown's tower as "clumsy, ill arranged and overloaded with ornament", and suggested that the tower be redesigned as larger and with tapering sides.

The Union Bridge has been refurbished and strengthened on many occasions (the paper by Miller linked below gives ample details, as does Bob Robson's book), most obviously including the addition of a wire rope cable above the original three suspension chains. 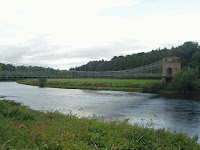 Even then, the bridge's load capacity is very limited, and in addition to a 2-tonne weight limit, only one vehicle is allowed to cross at a time (this is probably to avoid the risk of damage to the cables, which are not protected by parapets of modern standard). Walking across it, the vibration from a large 4x4 was noticeable, and it was fairly responsive even to a bit of jumping up and down.

I especially like Robert Stevenson's contemporary description of the bridge in the Edinburgh Philosophical Journal (linked below):

"The general effect of the Union Bridge, which we have now endeavoured to describe, is interesting and curious; and such is the extent, and its light and elegant appearance, that it has not inaptly been compared to an inverted rainbow. Those who visit this undertaking, as affording much novelty to the scenery of this part of the banks of the Tweed, will not be disappointed in their expectations; while, in a national point of view, as a great improvement, it deserves the most particular consideration of the country at large."

I have a lovely picture of my granddad standing in front of this bridge in c.1930. Let me know if you're interested and I'll send you a copy.