It has been a while since I've been able to get out and about visiting bridges, but during the summer I got to see a few bridges in Derbyshire. The first three all carry a private railway line to Breedon Cement Works near Hope.

This area was historically a lead mining area, and it was not until 1929 that quarrying of limestone began on a large scale and a cement works was built.

The cement works operated for several years before the Peak District National Park was created in 1951. Once the National Park came into being, agreement was reached for the vast bulk of the cement produced here to be transported by rail rather than road (amounting to over 1.5 million tonnes of cement annually). The cement works operates its own private railway track connecting onto the main Hope Valley railway line. The tracks pass under and over a number of bridges, some of which are of surprising interest. 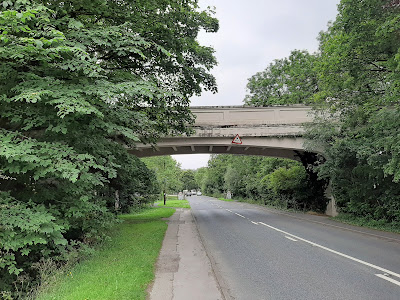 At least one of the original bridges survives, carrying the railway across Castleton Road. This is a three-span reinforced concrete bridge (perhaps appropriately, given its purpose to help transport cement). Presumably it dates from around 1929 as well. I haven't found any information on who designed it, or built it, or whether an architect was involved along with the engineer. One website suggests this bridge was "something of a showpiece for the works", which I guess might have been true. 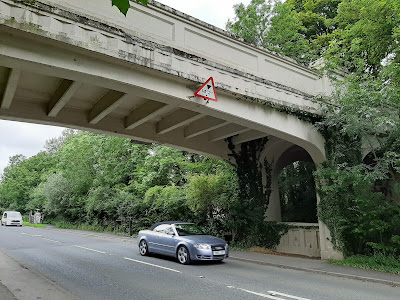 There is some traditionalist looking detail on the elevation of the bridge but the arched/haunched main beams are left unadorned. The beam-and-slab deck is a little like what would be called a ladder-deck bridge today, but it is in line with many early reinforced concrete structures patterned after the joist-and-floor layout familiar from iron and timber buildings. The internal arches to the piers are a nice detail that would be omitted in a more modern structure. 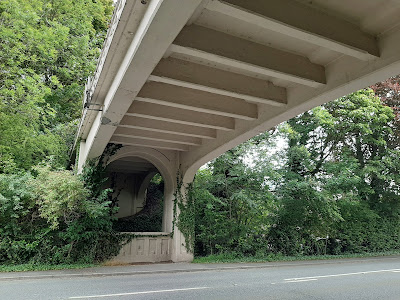 There are dents and scrape marks to the underside of the main beams, caused by over-height vehicles. Viewed close up, it looks as though the original reinforced concrete has been overcoated with a thin layer of additional material at some stage.

It's good to see this bridge surviving reasonably well, but it's the bridge in my next post that is the real highlight along this railway, and the reason I visited.

It seems possible that designer Mouchel and contractor W C French were involved using Hennebique concrete. There are a few references on Google Scholar which may or may not be this bridge. Unfortunately I am having difficu;lty copying the links. The following quote appears to be from the page 150 Structural Engineer 1929 and there is a similar refernce from page 1337 The Municipal Journal and Public Works Engineer 1928.

"The picture on the front cover is of Castleton IRoad Bridge, Hope, built in connection with the development of the new works for Messrs. G. & T. Earle (1925), Ltd. This bridge which is of reinforced concrete is 117 ft. long, and has a main span of 54 ft., sufficient to accommodate future road widening at this point."

I'll try and post the following links in case anyone can add anything.

Excellent, thanks, I've got hold of some of those documents and will update the post with further details when I get a chance.