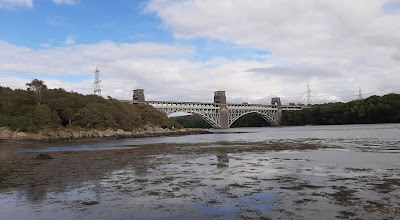 Thomas Telford built two significant suspension bridges on the north Wales coastline: the Menai Suspension Bridge (1819-1826), and Conwy Suspension Bridge (1822-1826). These formed part of a significant and much-needed improvement to the nation's highways. However, they were completed just four years before George Stephenson's Liverpool and Manchester Railway would kick start a very different transport revolution.

Roughly two decades after Telford did so for roads, it was George's son Robert Stephenson's turn to bring the railways to north Wales and Anglesey. He built two revolutionary bridges to span the exact same stretches of water as Telford: the Conwy Railway Bridge (1846-1849), and the Britannia Bridge (1846-1850). And just as had been the case for Telford, Stephenson could not do it alone.

The bridge across the Menai Strait was the most challenging element in the Chester and Holyhead Railway, and decisions on how to span the Strait remained unresolved while designs progressed for other parts of the line. Some thought was given as to whether the Menai Suspension Bridge could be modified to carry trains, but the loads required for a railway far exceeded those imposed by the horsepower that initially crossed Telford's bridge.

As in Telford's time, consideration turned to building a new arch bridge, but the Admiralty insisted on the provision of full clearance for high-masted ships across the full width of the Menai. Having settled on an alignment that made use of Britannia Rock in the middle of the channel, Stephenson proposed a flat span structure, with girders supported from above by suspension chains. The bridge towers were designed and then constructed tall enough to support such chains, although in the end they were never installed. 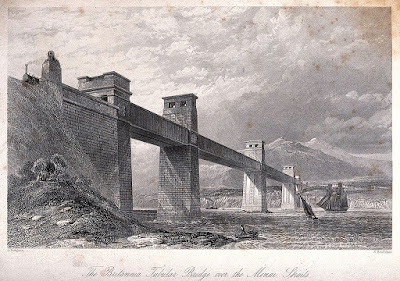 It seems that Stephenson conceived initially of a suspension bridge, and then sought a way in which it could be made sufficiently stiff to carry railway loads. He turned to William Fairbairn to investigate the feasibility of tubular stiffening girders, through which the railway tracks could run. Fairbairn rapidly came to the conclusion that the suspension chains would be too flexible, and should be dispensed with, but the less confident Stephenson kept provision for the chains until the bridge was complete. 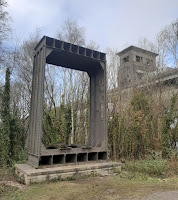 Fairbairn undertook many experiments on tubular cross-sections, and in turn involved the mathematician Eaton Hodgkinson to analyse the experimental results. Stephenson's preferred girder design was for an elliptical cross-section, but Fairbairn soon determined that a rectangular section was more efficient. It rapidly became clear that buckling of the top flange of the girder was the key issue, a problem that was resolved by adopting a cellular upper flange to the girder, initially comprising two hollow circular tubes joined together, and later evolving into multiple cells side-by-side. 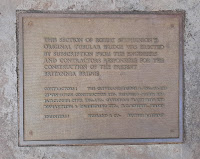 Fairbairn constructed a 75ft span model tubular girder to resolve the final details of the rectangular tube design. The side walls required internal stiffening, and in the final design both the top and bottom flanges were made cellular. Although Fairbairn's experiments had been on single spans, the bridge was built as a continuous girder, giving it additional strength and stiffness.

Some of the other key participants in the project included Stephenson's assistant Edwin Clark, and Fairbairn's assistant Mr Blair, who was largely responsible for producing all the bridge's design drawings. After Fairbairn and Stephenson fell out in a dispute over recognition as being the true designer of the bridge, it was Clark who wrote the account setting out Stephenson's side of the story. Fairbairn published his own, and it seems generally to be regarded as the more honest version.

Credit is also due to architect Francis Thompson, who designed the masonry elements in a vaguely Egyptian style, as well as several other works along the railway. Thompson later worked again with Stephenson on Victoria Bridge, Montreal, another tubular bridge, as part of the Grand Trunk Railway in Canada. 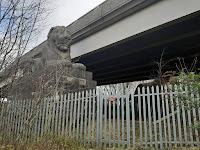 Four sculptural lions were installed, one at each corner of Britannia, Bridge,sculpted by John Thomas, who also worked on the Palace of Westminster.

Hodgkinson had also fallen out with Fairbairn, essentially over the latter's willingness to extrapolate the results of his experimental work in the absence of a justifying mathematical theory. Around this time, Fairbairn began building many girder bridges with tubular (box) girders, but suitable theory was only just becoming available to practicing engineers. The sheer scale of the Britannia structure went well beyond what had been attempted previously - just as Telford's Menai Bridge had done a quarter of a century before. 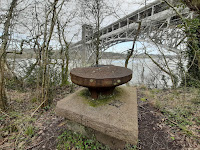 The project innovated in many ways. The extensive reliance on wrought iron was pioneering, and the span was exceptional for a flat-span bridge. The range of experimental work relied upon was impressive, as was the idea for the cellular construction. Even the erection of the bridge required major innovation, with the girders lifted into place by jacking upwards with massive hydraulic jacks. The slots for the jacking process remain visible on the towers, and part of one jack can still be seen near the bridge on its south-west side. 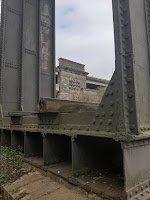 Two million rivets were reported to be used, with workers having to squirm through the box cells to install many of them. This, more than anything else, determined the size of the cells used.

On 24 May 1847, while construction of the Britannia Bridge progressed, one of Stephenson's other railway bridges collapsed, killing five people. The bridge over the River Dee near Chester was constructed of three cast iron girder sections connected with wrought-iron link bars. It was a popular design at that moment of time, with at least thirty-four built prior to the Dee failure. Fairbairn had proposed in 1846 that Stephenson should use a wrought-iron tubular girder bridge across the Dee, but had been turned down.

This incident exposed Stephenson's lack of expertise as a structural engineer, and Fairbairn's views prevailed both at Britannia and more widely - he was involved in over 100 more tubular girder bridges (albeit predominantly with the girders sitting beside the tracks, rather than containing the tracks) within a 5 year period.

While the tubular girder was successful in the short-term for short and medium span bridges, it was not the optimal solution for larger structures, and the Britannia Bridge design would prove a dead-end. Before long, various forms of lattice-girder and truss bridges took over, although early lattice-girder railway bridges experienced their own problems. For more detail I can wholeheartedly recommend John Rapley's and Richard Byrom's books (see list of references below), both of which are excellent.

Britannia Bridge was bold, if not entirely beautiful, but I think there is a great deal to admire in its simplicity of line. It lasted 120 years until, on 23rd May 1970, a fire broke out, irreparably damaging the bridge's two tubular girders. 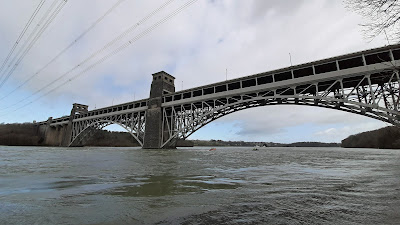 The replacement bridge seen today was built between 1971 and 1974, with two main truss arch spans over the Menai Strait. Both Telford and Stephenson had considered arch bridges, and finally the navigational restrictions that had forced both into bolder and more innovative designs were no longer an issue. 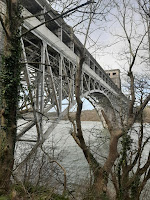 The form of the present-day bridge, designed by Husband and Co. (merged into Mott, Hay and Anderson in 1989, now Mott MacDonald), owes a great deal to the challenges of safely dismantling the damaged tubular girders, as well as to the need to reinstate a railway line as quickly as possible. 10,500 tons of metalwork had to be removed, forming a load well in excess of the railway traffic that the replacement structure would carry, and the arches were therefore designed and sized primarily to act as support to the demolition operation. Once the tubes were safely and temporarily supported, railway services were reopened through one of the damaged tubes in January 1972. The tubes themselves were cut into short sections, and then hauled off the end of the bridge using small locomotives. 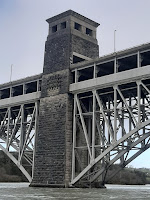 The bases of the towers were extended with small concrete skewbacks to carry stainless steel pins, which carry the entire load of the new bridge. The steelwork for the new arches was assembled by Cleveland Bridge four miles from the bridge, at Port Dinorwic, and floated into place on barges.

The spans were cantilevered outwards from the central tower, with adjustable tie bars passing through the tower to provide temporary support. Lifting gantries moved along the upper chord of the arch truss to lift each new truss unit into place, as can be seen in the construction photograph below (taken from a souvenir booklet about the bridge). 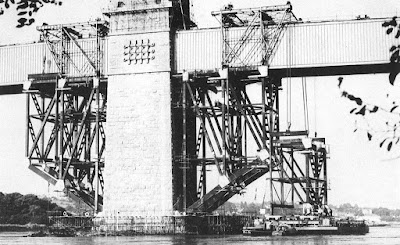 During construction, the arches each briefly formed a three-pinned arch before pre-load was jacked into the upper member to transform the whole system into a two-pinned arch.

Because the arches had capacity well in excess of railway loading, this created the opportunity to add a second deck to carry highway loading, and openings in the towers were enlarged to facilitate this. The railway bridge was finished in 1974 (albeit with only one deck carrying services, as railway traffic was much diminished), and the road deck eventually completed by Fairclough Civil Engineering and Fairfield Mabey in 1980.

The steelwork for the new railway bridge weighed less than half of Stephenson and Fairbairn's original wrought iron bridge, only 4,961 tons, although the road bridge (which is nearly twice as long as the rail bridge) incorporates another 4,338 tons of steel.

Although it is often noted that the ordinary observer prefers an arch bridge over any alternative, the modern bridge is, to my eyes, less loveable than the original. Partly this is because of the sheer quantity of truss bracing, and partly that the visual relationship between road and rail decks is uncomfortable. I think this is partly due to the sheer depth of the edge beams at railway level.

On the plus side, the history of the bridge is there to be seen. The excess tower height originally intended to carry suspension chains contributes to the support of the road deck and punctuates the span in a pleasing way (compare Sydney Harbour Bridge). The form of the arches betrays their origin as falsework for a demolition process. The preserved cross-section of  tubular girder (accessible via a path leading to the south-west corner of the bridge) is well worth visiting. The masonry still looks excellent today, and the bridge's best-kept secret, the "cathedral" vaults at each end, are still intact albeit normally inaccessible.

Thanks for this fascinating post. I'd forgotten that the arches supported the tubes during demolition, and that they even ran trains through the tube in the meantime.

I agree about how impressive the towers look looming above as you take the road across. Yet one recent proposal was to demolish them to allow the road to be widened. Thankfully, this was scrapped in favour of a third bridge, but will that ever happen now (particularly with Wylfa being cancelled)?