The crossing of the river Tweed at Dryburgh is the site of a key development in British bridge history. In August 1817, a footbridge was built here by John Smith, spanning 260 feet (79m). It was cable-stayed in form, rather than adopting the catenary suspension bridge form that had been pioneered elsewhere. There were other stayed bridges in the vicinity at King’s Meadows near Peebles, and in Galashiels, both also built in 1817.

In January 1818, less than six months after it opened, Smith’s Dryburgh bridge blew down in a storm. The form of bridge was blamed by authors like Charles Drewry and Claude-Louis Navier, and cable-stayed designs went on to become a rare eccentricity until their revival in the second half of the twentieth century. 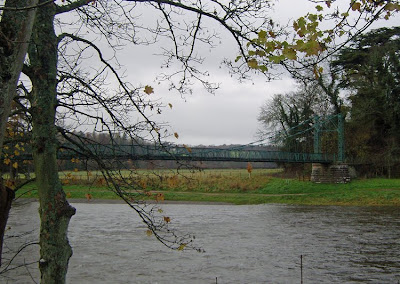 The failed bridge was rebuilt by Smith as a more conventional suspension bridge design by September 1818, and survived for several decades, although it also eventually failed. It's not entirely clear how old the present structure is.

The current structure is a lightweight, unassuming suspension bridge, with metalwork towers. Contrasting it to the stone towers and overweight deck at nearby Gattonside, it’s a much more delicate structure, although its dark green paint counteracts the lightness somewhat.

The main suspension cables are spiral steel rope, arranged in pairs on each side of the bridge. The deck is hung between them from inclined hangers. It's unusual to see inclined hangers on a suspension bridge, as while it increases the lateral stability of the deck, this comes at the cost of greater tranverse forces in both the deck and the towers - it's also less straightforward to build, as the main cables have to be pulled sideways, away from their natural catenary.

The blocks which clamp the hangers to the cables are a bit odd, resembling large blocks of lego, and certainly not original, judging from earlier photographs. Their sheer size detracts from the elegance that should normally be expected from a suspension bridge. 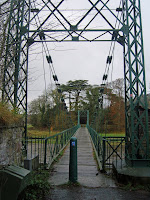 The towers are made from latticed metalwork, braced together overhead. To me, this gives the bridge a twentieth century look, similar to several of the suspension footbridges of David Rowell & Co., although there are also resemblances to the bridges of Louis Harper, which are mostly from the late 19th century. Structurae lists Dryburgh Suspension Bridge as dating from 1872, but RCAHMS cites J R Hume as believing it to be a twentieth century rebuild.

I can't say I find latticework towers particularly attractive, and there's something to be said for the more monumental masonry adopted at the nearby Gattonside footbridge. Metalwork is clearly more economic, though. 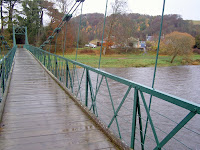 It's also interesting to compare the parapets at Dryburgh with the very heavy modern design at Gattonside. The lightest, and cheapest, parapets I've seen on historic suspension footbridges in the UK consist of wire ropes attached directly to the hangers, and used to support a mesh or chain-link infill. The parapets here are clearly a step up from that, with horizontal wires providing the pedestrian containment, while the main metalwork elements serve the primary purpose of stiffening the bridge deck.

They really do show how over-the-top the Gattonside design is. The parapets at Dryburgh are unintrusive (green paintwork aside), nothing more than they need to be, and all the better for it.

The present bridge was built in 1911. The heavy pates connecting the hangers to the catenary were a response to local corrosion of the plough rope catenary and were once clamped in place injected with resin. As far as possible the original structure was left intact. One of the problems with the bridge was the rigid connection between the deck and the hangers, which proved to be susceptible to fatigue the present detail incorporating rubber bushes allows for articulation and owing to the particular characteristics of the rubber provides damping against excitation.
William Day - williamt.day@btinternet.com