Since the publication of "The National Trust Book of Bridges", there have been a few coffee-table tomes on contemporary bridge structures, but none of these restricts itself to the U.K. and hence I'm not covering them in this series. There has also been the excellent "Civil Engineering Heritage" series of books, but these don't limit their contents to bridges, and it's not clear to me whether anyone other than civil engineers and industrial historians buys them.

So what, if anything, can be said to summarise this trawl through the books on the bridges of Britain? Do they indicate a shift in public interest in bridges over the years?

I think they don't, but they do reflect the continuing diversity of public opinion. The books of Jervoise and Wood offer different versions of the romantic strain, with its evocations of carefully crafted stonework nestled amidst the Constable-like landscape.

Others, such as de Maré, Walters and Richards, acknowledge the technological imperative which led Britain to become for a time in the 19th century one of the world leaders in bridge-building. With the exception of Richards, their books are still to some extent nostalgic in tone, with relatively little to say about what was happening in bridge design at the time they were written. Aside from Richards, only Jerome and Henry's book properly tackled contemporary bridges, and it wasn't really aimed at the general public.

None of these books reflect the significant shift in public perception that has taken place over the last two decades. I think two phenomena have combined to make a large portion of the public not just tolerant of contemporary bridge design, but actively enthusiastic about it.

The first is a general increased public interest in architecture and design, fostered in no small part by television's ability to establish a continuity between the aspirations of home owners (Grand Designs) and award-winning achievements in the public realm (the Stirling Prize).

The second is the introduction into bridge design of something beyond mere elegance. This is the joie de vivre and unashamed spectacle which is often credited to Santiago Calatrava but is a general feature of the more prominent involvement of architects in bridge design.

I had therefore expected to conclude my series with the thought that the first book on British bridges to acknowledge the post-modern era, the period of highly architected "iconic" footbridges, is long overdue. But there's little sign of such a beast just yet. No doubt it's time will come. 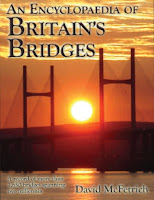 I'll conclude by noting that, later this year, Priory Ash are due to publish David McFetrich's "An Encyclopaedia of Britain's Bridges". This new book will cover more than 1,650 structures over 352 pages, alongside general information about types of bridge, failures, and lists of various record-breaking bridges. I gather that the print run will be dictated by demand, and pre-orders can be placed at Priory Ash, 2 Denford Ash Cottages, Denford, Kettering, Northants NN14 5EW, UK (send your name, address and contact details, and you'll be invoiced £45.00 when the book appears - overseas readers should enquire for details first). For orders placed before the end of August, subscribers can have their names acknowledged in the book.
Posted by The Happy Pontist at 11:39 PM