], published in 1970, is one of several similarly named guides to British spans that I'm covering in this series of posts.

Wood was the author of a variety of books of "local history", on topics like "Secret Britain", "Ferries and ferrymen", and "Yorkshire villages". As such, "Bridges in Britain" is a book aimed more at readers interested in traveller's tales than in the bridges of its title.

The book appears initially to be organised by theme, with chapter headings like "Prayers on the Bridge", "Bishops and Bargemen" and "Minstrels, Witches, and the Devil". But these largely disguise the fact that it's a peripatetic ramble, structured loosely by location. "Bishops and Bargemen", for example, largely recounts tales of bridges in the Bristol/Bath area, and the southern Welsh borders.

It's quite unlike most of the other books I'm covering in this series (although it's closest in style to Jervoise). Wood sets out his stall in the introduction:

"Bridges of almost every description, from the primitive Dartmoor type to elegant Georgian examples, make the British country-side worth exploring on this count alone. They inveigle one into quaint by-ways, charming villages, and fine old country towns. They can make one aware of local history, and of the people who in bygone times dipped hand in pocket so that the river or stream that gave the squire (and not a few poachers) a dish of salmon-trout could be crossed in safety."

As this might suggest, Wood is generally more comfortable relating tales of ghosts, legends and historic happenings related to the bridges, than discussing the bridges themselves. As such, his preference is for older bridges, although more modern structures like the Forth Road Bridge and Severn Suspension Bridge are both featured. Few rail bridges are included, indeed few bridges from the 20th century. 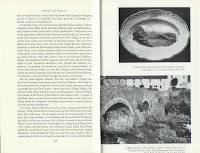 There are photographs included, and a map showing the general location of the main bridges mentioned but the book is not well-illustrated. Great lengths of text read not unlike an amiable old uncle, developing verbal diarrhoea when under the mistaken impression that your brief mention of a liking for bridges was an invitation to submit to endless tales of fusty, dusty antiquity.

There's little here that recognises bridges for their architectural and engineering achievements, and consequently it's probably one of the books on British bridges that's of least interest to me.
Posted by The Happy Pontist at 8:37 PM