Earlier in this series of posts I deliberately skipped past "Road Bridges in Great Britain", published in 1939, on the grounds that it was aimed at engineers rather than general readers. This next book nearly fell prey to the same decision, but despite its inclusion of numerous (simplified) technical drawings, it was clearly aimed beyond the engineering audience. 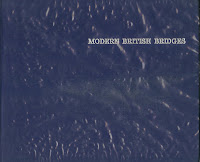 ]. According to the authors, this was near the end of "a momentous decade for British bridge builders", with roughly 3,000 new bridges built, including the Forth and Severn Suspension Bridges. These were highway bridges associated with construction of many new dual carriageways and motorways, although as I mentioned in the last post, there were new railway bridges built throughout the 1960s as well. This book, however, concentrates overwhelmingly on road and foot bridges.

In introducing their subject, the writers suggest that:

"Bridge-spotting is an exciting pastime which may outlive train-spotting .... It is hoped that the specialist bridge engineer will realise that it has taken a lot of courage to attempt some of the simplified explanations of complicated engineering principles. The aim has been to enable the interested enthusiast to understand the problem, so that he can more readily appreciate the difficulties that have had to be overcome".

This isn't really a book aimed at bridge admirers keen to get about the country in search of structural splendour. For one thing, many of the bridges featured are, to say the least, visually unspectacular, while others have no visual interest at all (e.g. "Flood arches, Ross-on-Wye, Herefordshire" or "Typical underbridge, Birmingham - Preston Mortorway"). Even bridges which by virtue of their form ought to be more attractive are often aesthetically unsatisfying, as with the reinforced concrete arch of Lune Bridge on the M6, which compares poorly with Robert Maillart's achievements of some three or four decades before. 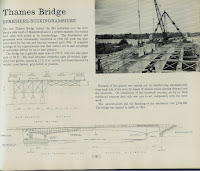 Each bridge is allocated a one or two page spread, with generally short text accompanied by photographs and technical drawings - plans, elevations and sections, many of them plucked straight from the original bridge general arrangement drawings. Clients, designers and contractors are all properly credited. Some of the bridges were still in progress at the time of publication, such as the Wye Viaduct, and are illustrated by artists' impressions.

The text is generally dry to the point of dessication. Taking the Wye Viaduct as an example, it tells us its dimensions, weight and estimated cost, but the nearest it gets to describing the bridge's significance is the statement that it "is of considerable technical interest" (as well it might be, being one of the first major cable-stayed bridges built in Britain).

Where bolder opinions are ventured, they sometimes seem bizarre. For example, Clifton Bridge in Nottingham, a rather bland prestressed concrete balanced cantilever road bridge, is described as "one of the most beautiful bridges built in this decade".

Looking back on it today, the book is essentially worthless as a genuine traveller's guidebook. It's also hard to believe it found much of an audience beyond the engineers whose bridges are featured. While it is commendably positive about modern design, it is simply too dull to inspire any great enthusiasm in its subject.

There are pages and pages of what, to modern eyes, appear to be unremarkable motorway structures. It just predates the construction of the M4, which has some of the more technically interesting structures on the motorway network, but has many examples from the M6.

These are not without a certain interest: I've personally worked on a number of the bridges listed in this book, and many other bridge engineers working today will have done so too. In terms of the history of everyday bridge engineering, it's a valuable record of design practices that were once innovative but are now commonplace, as well as those which have been seen with hindsight to have been terribly flawed.

Indeed, with so many books on bridges concentrating only on the great and the good, it's pleasing to see the bad and the ugly recorded for posterity as well. This is therefore a book that fills a very special and important niche of its own.
Posted by The Happy Pontist at 10:22 PM