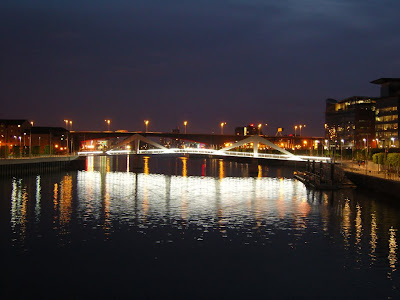 I visited the Tradeston Bridge just over a year ago, very shortly after it opened in May 2009, and had a good look around in the day time. More recently, I returned at night. 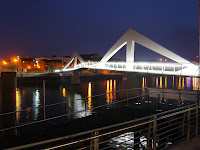 The design, by Halcrow with Dissing + Weitling, is brutally minimalist, with an extremely slender S-curved deck achieved at the cost of heavy support pylons. There are very few bridges quite like it, although the Valencia Port Swing Bridge perhaps comes closest. 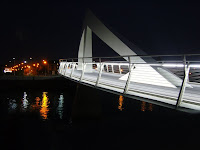 The handrail lighting is the Rail Light system, and it seems a little overdone, judging by the amount of light spilling into the river. On the night I visited, part of one handrail light was dark, but you'll have difficulty telling where from these photographs.

There's enough light from the handrail that there's no need for feature lighting on the pylons, and these can be seen looming up into the darkness. 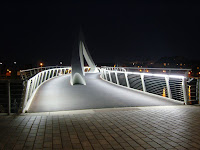 Since my previous visit, when climbing the pylons seemed to be all the rage, I've heard no further reports of the bridge attracting unauthorised climbers. Presumably the local CCTV is well monitored. The bridge is still seemingly well used, with quite a few people passing over while I photographed it, close to midnight. 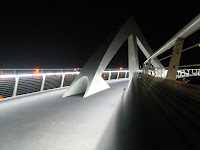 I still very much admire its simplicity, and its starkness, which is especially the case at night. It has a great sense of presence for a bridge on a relatively small scale, and the contrasts between its angular sufaces and curved lines is surprisingly successful. Its iceberg aesthetic is at odds with the rest of Glasgow's bridges, but I like it.