Most of the books I'm covering in this series are transport-agnostic in their coverage i.e. they feature bridges whether carrying railways, highways, canals or anything else. Jervoise's "Ancient Bridges" did restrict itself only to road bridges, and this next book similarly limits its interest only to rail bridges.

], by David Walters, was published in 1963 by Ian Allan, a specialist imprint largely aimed at railway enthusiasts (or "trainspotters", as they're better known).

As such, it's a book aimed at a readership which was and is generally aware of engineering history, but probably has limited specialist knowledge of bridge engineering. It would therefore be unfair to use this book to speculate about wider social attitudes to bridges.

Walters provides details of a number of significant rail bridges, chosen because they are either major landmarks, or illustrative of key technical advances in railway bridge construction. The structures include many of the greatest bridges every built in Britain, such as Maidenhead Bridge, the Newcastle High Level Bridge, Royal Border Bridge, Royal Albert Bridge, Forth Bridge and Connel Bridge. The bridges date from the marvellous Gaunless Bridge of 1825 to 1906's King Edward VII Bridge, with only a couple of structures mentioned thereafter, like the pioneering prestressed Adam Viaduct in Wigan.

While this suggests an aversion to modernity, it's probably just the case that railway bridge construction in the UK entered a lengthy hiatus throughout the early twentieth century. Few new lines were built after the great Railway Age, and the bridge replacements undertaken were mostly of smaller structures. 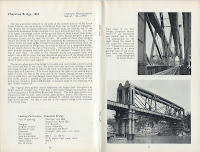 Like National Benzole's "Bridges", published the same year, the main part of the book covers the chosen bridges with a series of 1, 2 or 3 page spreads. These are heavier on the factual detail, with dates, designers and dimensions carefully tabulated. While "British railway Bridges" is strong on the facts, and never afraid to offer a subjective opinion on each bridge's merits, it's weaker on the bridges in context, their effects on society and the surrounding environment.

It does include a very good history of rail bridges in Britain, and tables of bridges by span, length and height. Every bridge is given a map reference to assist travelling bridgespotters.

Sadly, most of the great railway timber viaducts had been replaced by 1963, and none are included in this book. (As I write, it has just been announced that one of the only remaining timber rail bridges, at Penrhyndeudraeth, is to be replaced with a modern structure, which is a terrible shame given its historic status and that it is supposedly protected by Listing.)

Walters could be perceptive about the qualities of engineering. Writing about the Crumlin Viaduct, completed in 1855, Walters correctly notes what a step forward its lightweight trusses were in design from the heavy box girders of Britannia Bridge opened a mere 5 years before. The Viaduct was closed to traffic only a year after this book was published, as a result of the Beeching cuts, and then dismantled beginning in 1966. Brunel's Chepstow Bridge is another bridge featured which has not survived (it was already being taken down while the book was being written).

This would all suggest that the book could have been a nostalgia-tinted tribute to a bygone age, as with Jervoise's books written in defence of a vanishing heritage. Railway bridges have never been well-protected, and many were swiftly torn down in the 1960s. But the 1960s was also a time of significant renewal of rail bridges, with technological advances like the welded box girders at Trowell Bridge and Churchdown Bridge, or the unusual post-tensioned spine beams at Fairfield Street Manchester and Besses o'th' Barn. While many of these were visually lumpen, fine bridges were being built, notably two prestressed concrete bowstring arches at Frodsham.

It's a shame that Walters' book came out just too early to include any of these, as despite his welcome appreciation of bridge engineering, he still leaves the impression that the great rail bridges are a relic of the past, monuments to a distant and more heroic age.
Posted by The Happy Pontist at 11:46 PM