Bridges in Britain: 2. "Bridges of Britain"

Okay, moving on from E. Jervoise's somewhat bucolic "The Ancient Bridges of the South of England", we jump from 1930 on to 1954.

Of the books that I have on my shelves, I'm skipping past "Road Bridges in Britain", published in 1939, because although it's a splendid book, it's very much by engineers for engineers, compiling material that had appeared in the trade journal "Concrete and Constructional Engineering". It doesn't purport to be a nationwide survey, and with its technical data and engineering drawings it's of little interest to the general reader. It's still an interesting book, so perhaps I'll cover it some other time.

The mid-twentieth century was a period of major technological development in bridge engineering. I'd guess that most new highway bridges being built were now of reinforced concrete. Prestressed concrete had been developed, with both precast and in-situ designs being built in Britain by the 1950s. Electrode-welded steel bridges were also becoming a more popular solution, although riveting persisted until the 1960s in some cases. 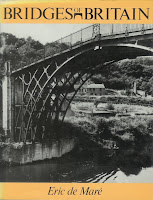 ]. De Maré was an architect, photographer and writer who at one time edited the Architects Journal, and who had a special interest in industrial architecture, including canals and bridges. More than 2,800 of his photographs are available online courtesy of English Heritage.

The bulk of the book is structured chronologically, covering the medieaval, post-Reformation, industrial revolution and modern eras. Each chapter mainly consists of photographs, with little text, but supplemented by period illustrations, including paintings and engravings. An introductory chapter explains the key bridge types and materials, while a final chapter briefly discusses failures and unbuilt designs. The book is completed by a county-by-county gazetteer of significant bridges, which, while not always helpful on a bridge's precise location, gives a clear signal that bridges are better seen than read about.

De Maré acknowledges the influence of the nascent discipline of industrial archaeology, and sets out his book's aim:

"It is offered as informative entertainment to the layman so that when he moves around the country he will not pass the many bridges he crosses in blind and blasé boredom but, by realising what they mean in terms of social history, human endeavour, and formal beauty, he will stop to contemplate them for a moment, and so find pleasure".

An indication of de Maré's sympathy for the functionalist tradition in bridge-building is his suggestion that Britain led the world in bridge design for over a century (from the Iron Bridge in 1779 to the Forth Railway Bridge in 1889) - this is not a book befuddled by the supposed virtues of ancient craftsmen, but one that recognises that modern engineering has played a key role in creating spectacular or aesthetically satisfying bridges.

De Maré saw virtue not in antique charm, but in the modernist ethic: "At their best, bridges can be seen as symbols of architectural purity in which firm construction, function, and pleasing form are combined".

I can only presume that this book found an audience - the publisher, Batsford, were also marketing more general architectural books, as well as titles like "Science and the Home: 500 Years of Technical Advance". That would indicate a public (or at least that slice of the public who were fairweather pontists) with an appreciation not just for the dusty tales of Jervoise, but for the engineering achievements of the Victorians. L.T.C. Rolt's very popular biographies of Brunel and Telford were published in 1957 and 1958, suggesting that de Maré's book was just one contribution to a growing interest in industrial heritage.

De Maré's interest in bridges extends well beyond the Victorian era, acknowledging the continental greats like Maillart and Freyssinet, and showing a keen appreciation of modern designs like the Kingsgate and Swanscombe footbridges. Here, I suspect he was ahead of his time. If that wasn't the case for these bridges, then it must surely have been for his inclusion of the Almondsbury Interchange and Tinsley Viaduct.

He wasn't alone in this enthusiasm for the new: Elizabeth Mock's seminal "The Architecture of Bridges" had been published by the Museum of Modern Art in 1949. It was hugely sympathetic to contemporary engineering's contribution to modernism, but I suspect this attitude was largely confined to specialists and gallery-goers, not the generalist audience that de Maré's book was aimed at.

"Bridges of Britain" remains an enjoyable book today. While the text is brief, the photos and historical images are excellent. Several photos pick out interesting details on bridges, or appear as almost abstract exercises in geometry (see for example, two classic images).

The gazetteer features a thoughtful selection of bridges from all periods, although in many cases the information isn't detailed enough to help locate some of the less well known structures. It's still a useful reference today, with its inclusive approach.

In short, it's a splendid book, communicating the author's enthusiasm effectively, subjective in its opinions where it needs to be, and generous in its open-minded attitude to both the old and the new.
Posted by The Happy Pontist at 9:57 PM