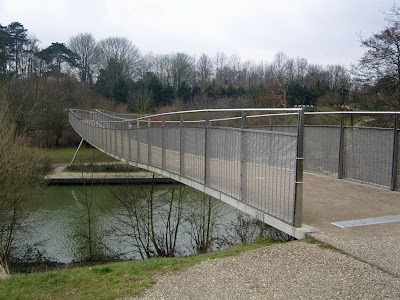 Walk north in Maidstone from Lockmeadow Footbridge along the river Medway, and you'll come to the first of the town's two other millennial footbridges. This pair provide entry across the River Medway into the Whatman Field Park, and are named the Kent Messenger Millennium Bridge and the Whatman Field Downstream Bridge. These other bridges were both designed and built by a single team, as part of the Millennium Commission funded development of Whatman Park, one of the main sections of Maidstone's Millennium Riverside Park. This post will cover the Kent Messenger bridge, with the Downstream bridge to follow later.

In a paper on the two bridges, their architect Cezary Bednarski notes that they were the only millennium bridges in Britain not to be the result of a design contest. I'm not convinced about that, but Maidstone Borough Council certainly got good value, with both bridges being interesting and innovative structures, and both going on to win awards. 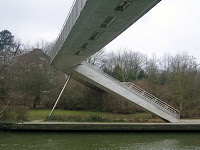 At the time the bridges were designed, Bednarski was a director of Studio E Architects, although he started a new firm Studio Bednarski a few months after the Kent Messenger bridge opened in July 2001. His engineering partners for the design were Strasky, Husty and Partners, and Flint and Neill. The main contractor was Balfour Beatty.

I'm not sure what the Kent Messenger bridge cost: Structurae and fib's Guidelines for the design of footbridges both report a figure of £1.76m, which works out at about £5.6k per square metre of deck, but Bednarski's paper states the cost to have been £2.9k per square metre. 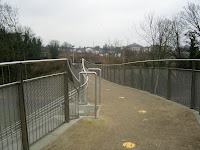 The bridge is a very unusual structural form - the world's first cranked stress ribbon bridge. Perhaps it's still the only one. A stress ribbon bridge is essentially a catenary structure which has been stiffened by prestressing against itself. Depending on the specific geometry, it can be thought of as a reverse arch, where the prestress provides a broadly uniform upwards force along the structure's length, locking the structure in place. I've covered one such structure here before, the Punt da Suransuns, in Switzerland.

The stress ribbon bridge's generally low load-bearing capacity, together with the sagging geometry, mean that it's a structural form generally limited to footbridges. Even so, it's rarely an optimal form. What is gained in material economy in the deck (Kent Messenger bridge's 3.1m wide deck is only 0.29m deep) is generally lost in the cost of massive foundations, and the foundations for the Kent Messenger bridge are massive indeed, as can be seen in a diagram at Strasky's website. The sagging geometry is also often hard to reconcile with the need to provide a gentle slope, suitable for access by the mobility-impaired. Keeping the slope shallow enough can result in very high horizontal forces, and still larger foundations. 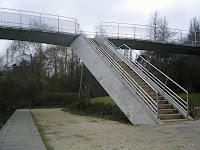 So, what does "cranked" mean, and why is it so unusual? Essentially, it means that the bridge is kinked in plan. The Kent Messenger bridge is 101.5m long in total, with two spans of 37.5m and 49.5m respectively. At the central support, the deck changes direction in plan by 25°. To make that possible, a large horizontal restraint is called for, as the tension forces in the two spans don't balance.

The nearby Downstream bridge (which I'll cover in the last post in this short series) was also originally proposed as a cranked stressed ribbon, with the resultant force at the "crank" restrained by a tie. It was eventually built in a much different form, but the Kent Messenger bridge retained the crank, with the resultant force restrained by a strut. The strut is angled downwards according to the vector sum of horizontal and vertical reactions, and conveniently doubles as a staircase, a very effective solution. 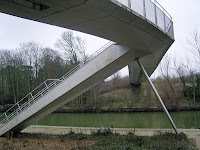 Unfortunately, it doesn't quite work perfectly under all load cases, and a very slender stainless steel member had to be incorporated below the support position, acting in many cases as a tie to prevent the deck rising, and in some cases as a second strut. It could only have been omitted by providing the staircase with much enhanced bending capacity, but I think it's a shame it was included, as the bridge would be far more impressive without it. The bridge deck itself consists of 3m long precast concrete segments composite with an in-situ infill deck slab. The segments are supported on a set of four bearing and four prestressing cables cast into the infill.

Drainage grilles are located along the centreline of the bridge (and can be seen on the image on the right), breaking up the structure's monolithic appearance and allowing the river to be seen through them. These alternate with lights embedded in the deck (see below left). These are the same kind of lights you would find on an airport taxiway, a rather idiosyncratic choice. 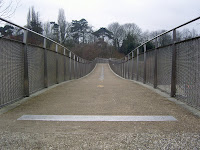 The bridge parapet incorporates a custom-designed stainless steel mesh, which is now marketed as the "Medway" mesh by Potter and Soar.

As with the Lockmeadow footbridge, the Kent Messenger Millennium Bridge wasn't shown to its best on a dull, overcast day. Given that stress ribbon bridges are often chosen for their lightweight, slender appearance, I was surprised to find this bridge offering an almost brutalist statement. The cranked geometry was clearly an attempt to push at the boundaries of structural design - there are several other forms which would have served as well, perhaps incorporating some of the length eastern approach ramp into the bridge structure. The staircase strut is a great design feature, although it's a shame about the presence of the central tie, as the bridge would have had a far more startling visual tension without it.

The overall geometry aside, it's a plain, functional, rather minimalist structure, and none the worse for any of that. Compared to the tangled cat's cradles of two of its contemporary Millennium Bridges (at Bankside and Hungerford), it deploys its structural ambition to a more self-effacing end. The views off the structure are kept free of cables and struts, and there's little more to see below. I can't say I found it at all an exciting bridge to visit, but I guess that's part of the intention, and it's good to see a strong design that doesn't take its lead from Calatrava.

Further information:
Posted by The Happy Pontist at 9:19 PM