The Glasgow footbridge competition of 2003 was something of a watershed for bridge design competitions in the UK. Glasgow City Council invited design teams to propose a new footbridge across the River Clyde between Broomielaw and Tradeston, along with other improvements to the riverside. Thirty one teams expressed an interest, and six were shortlisted. A £40m project budget was declared, of which £15m was to cover a 100m long bridge.

The competition was won by Atkins and Richard Rogers Partnership, whose detailed design went out to tender in 2005. Only two bids were submitted in early 2006, both well in excess of the original budget, the lower being £50m. Glasgow unceremoniously waved goodbye to the winning design, and organised a fresh contractor-led competition with a lower budget. This was won in turn by Nuttall, with Halcrow and DISSING+WEITLING acting as designers. At the time of writing, construction of the bridge is proceeding on site, although it has not been without some hitches.

While the original glasgowbridge competition is far from the only such contest in the UK to result in a bridge that bust the budget or suffered technical problems, it was a very prominent example of what can go wrong, and helped trigger considerable discussion on how such competitions could be run better, and who should run them.
The original competition website has long since disappeared, but some information on the scheme is archived at e-architect, and there was a lengthy discussion in the competition's aftermath at archiseek, including comments from at least two of the unsuccessful designers. The bridge's troubled gestation has also been covered at skyscrapercity more than once.
This was a competition where the client had a clear idea what they wanted: a big name to wave around, and their own attention-seeking rival to the Gateshead Millennium Bridge. It's good that they shortlisted some less well known competitors as well, although the inclusion of gm+ad may just have been a sop to local interest.
I remember thinking at the time how odd it was that both Clyde 9 and via involved a glazed arch bridge with pedestrian access to the top of the arch. Was something in the air? How many drunken Glaswegians late at night could have resisted the temptation to find out how breakable the glass was?
The Latis scheme was presented so obscurely it was hard to work out what type of bridge it was (or, on some of the hand-rendered visualisations, where it was). The Mirror Bridge was an admirable attempt to design something sensitive rather than pandering to Glasgow's aspirations, but it's no surprise the council opted for something tall and striking. The same will have also applied to People's Crossing, although it wins points for being the least conventional structure (impossible to tell from the images what type of structure it actually is!).
The winner, Neptune's Way, was well-criticised at the time, especially after the project failed, and I think its structural perversity was obvious from the start. In most inclined arch bridge designs the arch slopes away from the deck to counterbalance it, and in this case it was obvious that very high cable tensions would be required to hold it up at the very shallow angle depicted. The images show that additional props to hold the arch up were added to the design after it had won.
As always, click on any image for a larger version. Links are only provided where there is project-specific information relating to a design or designer. 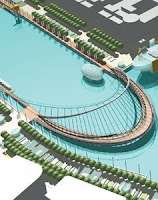 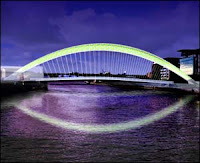 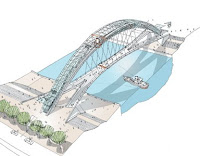 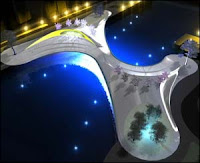 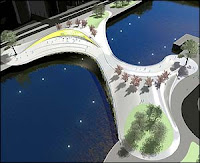 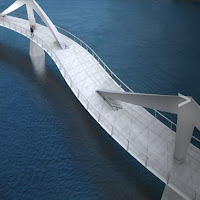 I posted this 7 years ago, and e-architect have moved their pages around since then. Neptune's Way was the competition winner, and was never built. Tradeston Bridge was built in its place. Clyde Arc is an entirely unrelated bridge.