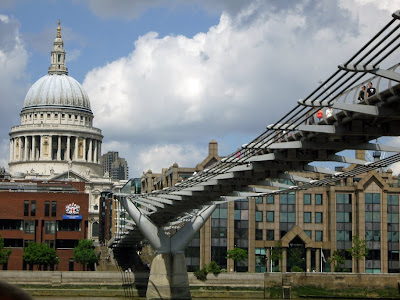 I've held off on so many occasions from commenting on this bridge. I've visited it several times in the past, but on my most recent visit, several points occurred to me which are perhaps worth addressing here.

I will say as little as possible about the bridge's history: that can all be found online elsewhere. I hope at some stage to cover the losing competition entries here, but that's a project for another day.

For now, I'll just give a quick cost comparison with the Golden Jubilee Footbridges. The Millennium Bridge is 333m long, and 4m wide. It cost £23m in 2000, including the refurbishment carried out after it notoriously wobbled. That works out at £18k per square metre, compared to £13k for the Golden Jubilee Footbridges. The Millennium Bridge is one of the most expensive footbridges of all time (beaten only by Gateshead's Millennium Bridge at £22k, with Kurilpa Bridge and Calatrava's Sundial Bridge at a mere £10k each, although Kurilpa's figure is flattered by the inclusion of its less structurally ambitious approach spans). For those spectacular sums of money, a promoter must get something of spectacular value in return.

The designers, Arup and Foster + Partners, described the bridge concept as "a thin ribbon of steel by day ... a blade of light at night". To achieve this, the extremely low span-to-rise ratio of 62 for the cables is roughly six times shallower than in a normal suspension bridge. As a result the cables (and more impressively, the foundations) carry a horizontal force of over 2000 tonnes, under dead load alone (if you picked the structure up on its end, one set of cables could carry three Millennium Bridges with ease).

I know I'm not alone in finding that the bridge in reality fails to live up to the vision of a "thin ribbon of steel". From almost every perspective, it's dominated by the cables and their outriggers. The low profile of the cables, which pass below the deck at midspan, requires the use of very stiff steel outriggers to hold the deck and cables in the correct geometry. The apparent "wave" created by the varying angle of each outrigger adds to their visual mass, such that from several viewpoints you can't see through them at all. A conventional suspension bridge, with its lightweight hangers, would not have had this issue, with views both onto and off the bridge being far less cluttered. Of course, it's arguable whether the towers for such a structure would have had an adverse visual impact. 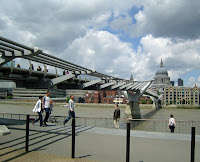 Another difficulty with the outriggers is the way they pass below the main deck structure. I'm not entirely clear why this has been done, other than to simplify construction. In their current form, they cradle the deck units, with the deck edge beams sitting above the outrigger crossbeams. Again, from many perspectives this makes the bridge seem very bulky, as the crossbeams add to its apparent depth (something that wouldn't be apparent on a nicely drawn elevation of the bridge). The alternative would have been for the crossbeam to be within the same depth as the edge beam, passing "through" it and giving a much lighter appearance overall. Presumably this would have added to the complexities of fabrication. 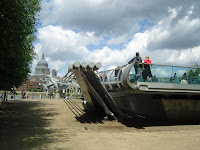 The bridge's south abutment (pictured right) has always seemed to be an unhappy way to terminate the cross-river journey, with the deck splitting in two and then doubling back below itself, to a landing area which is often heavily congested by pedestrians as a result. The obvious route off the bridge is blocked by a glass balustrade that offers a view of nothing in particular.

Riverboat and riverside path headroom restrictions mean that the bridge must arrive on the south bank at height. Given the presence of a large plaza in front of the nearby Tate Modern gallery, the obvious solution to me would have been to landscape that area and provide ramps to ground following the various pedestrian desire lines. However, I believe that site constraints may not have allowed that when the bridge was built. At least they didn't build what was shown in the original Arup / Foster / Caro competition entry (pictured on the left).

The dampers which have been added to the bridge to prevent it from wobbling undoubtedly detract further from its appearance, but it would be unfair to criticise the designers for this, as they have clearly made the best of an awkward situation. There are diagonal bracing members next to the piers, diagonal bracing below the deck, little splayed damper "legs" on the riverbank, and more. The "legs", visible in the abutment photo above right, are probably the worst addition, visually. I do wonder whether it wouldn't have been better to go the whole hog and triangulate every bay of the bridge in order to give it a consistent look, but what has been done is presumably the least possible compatible with eliminating oscillation.

To a great extent, the appearance of the bridge is a logical consequence of making certain key design decisions at an early stage, and being locked into those choices thereafter. The design concept - the blade of light - was established by Arup engineers Chris Wise and Roger Ridsdill Smith who decided they "should just make the structure from cables stretched as tight as possible between the two banks, and then walk on them". That brings to my mind a stress ribbon bridge, which the Millennium Bridge has sometimes been described as, but certainly isn't (the deck segments aren't prestressed together longitudinally, hence their potential contribution to the stiffness of the bridge isn't exploited).

The decision to use the low-rise suspension bridge to achieve this was locked in place at competition stage, and had to be made to work thereafter. The relationship between cables and deck lead directly to the very high cable forces, the unfortunate lateral frequency of vibration, and the tangle of steelwork that now defines the bridge's aesthetic, in quite marked contrast to the original concept. Some of this is a flaw in the design competition route, which generally sets the final appearance of a bridge very early, unlike "conventional" design development where different structural options can receive a more thorough evaluation (often at the cost of daring, imagination, and star quality, of course).

Great Review. I always thought that Millennium Bridge is not as awesome as people make it to be.