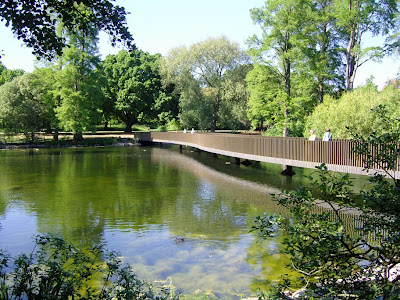 The last of four bridges I visited in London recently was also at Kew Gardens, the Sackler Crossing.

Designed by John Pawson, engineered by Buro Happold, and built by Balfour Beatty, this 70m long S-curved monument to minimalism connects footpaths across a small lake, encouraging visitors into areas of the Gardens not always well-trodden. 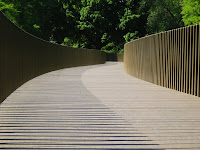 Opened in May 2006. the bridge is intended to give the feeling of "walking on water", and is set quite low against the lake (although not as low as I had expected from comments from other visitors). The bridge deck consists of 564 slender black granite "sleepers", supported on a hidden steel framework which in turn rests on steel piles ever 8m. 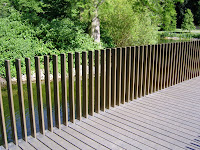 There are 990 bronze balusters, each with a curved top but no handrail. I've seen a similar design only on one or two other occasions, as most footbridges provide an upper rail, which serves both as a handrail and also to make the posts more economical by sharing loads between them. A continuous top rail is mandated in the relevant standards (e.g. BS 7818), but it's great to see it dispensed with for such pleasing effect as here. 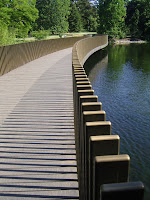 The shape of the balusters is such that they appear essentially transparent when viewed face on, but solid when viewed at an angle. It's a charming concept, and lends the bridge a visual interest that its minimalist heritage would seem to have precluded.

An unobtrusive bridge was definitely the right response to a very tranquil setting like this, and I was particularly impressed as to how well hidden the supporting engineering was, with the impression given that the granite deck planks just float above the water. 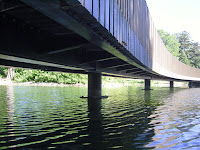 It's a shame the water level wasn't higher when I visited, as it would definitely have looked better that way. You have to clamber down the bank of the lake to see what's really going on underneath, and no sensible visitor would do that.

The bridge certainly merits the several awards it has won, and offers a welcome reminder of the possibilities for bridge design beyond those which emphasise the structure or which feel obliged to at least display it honestly. While I enjoy minimalism in the arts, I'm not normally an admirer of it in architecture, but it makes perfect sense at the Sackler Crossing. 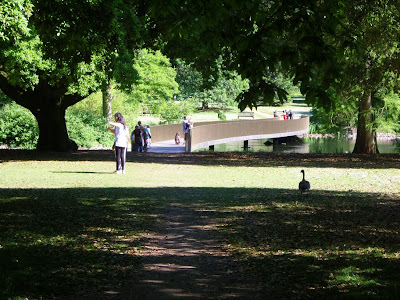