I was in London at the end of May, and passed by a couple of bridges on the River Thames very briefly, en route to somewhere else. So the next couple of posts aren't intended as comprehensive reports, just as quick commentaries. 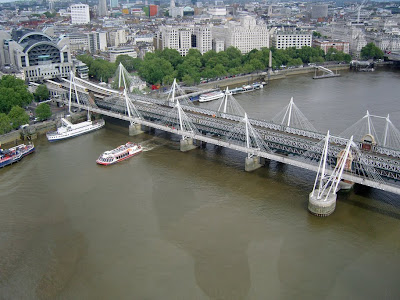 The first of the two visits was to the Golden Jubilee Footbridges, two nearly identical structures jutting out to either side of the Hungerford Railway Bridge. These were the result of a bridge design competition, won by WSP and Lifschutz Davidson in 1996 against over 40 other entrants. The aim was to replace one existing footbridge supported from the east side of the railway bridge, which was narrow and unattractive. The bridge forms one of London's key pedestrian crossings of the Thames, linking two railway stations, the concert halls of the South Bank Centre, the Thames Embankment, and various routes running north towards the city centre.

The bridges were completed in 2002 as a design-and-build project, with the detailed design by Gifford, and Costain and Norwest Holst as contractors. Some changes were made to the concept design, but its basic appearance is largely unaltered and hence Gifford can be absolved of its various visual deficiencies.

Costing £39.5m in total, each footbridge is 315m long and 4.7m wide (that works out at about £13,000 per square metre of deck). The seven spans range from 50m to 65m. The steel pylons support a reinforced concrete deck, which was erected by launching from the river bank.

Many of the bridge's peculiarities relate to the site's challenging geometry and ground conditions. One pier, the A-frame now visible on the north river bank, had to be moved to reduce the risk of setting off unexploded bombs above an underground rail tunnel. Others are positioned according to the need to align the new piers with the existing rail bridge supports, one of which still sits where Brunel's original Hungerford suspension bridge was originally supported (the brick towers were reused in the railway bridge). 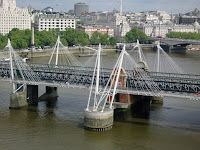 I dislike the use here of a flotilla of low-height cable-stay pylons anyway, but the two odd supports (an A-frame on the north bank, and a V-shaped pylon inclining the opposite way to every other mast at the main southern pier, pictured right) mar the otherwise relatively regular layout.

The overly complex arrangement of cables and bars at this particular pier strikes me as particuarly ungainly. If you click on the picture for the larger version, you can just about make out the pylon caps, which are very clumsy, with subsidiary "angel wing" elements hung below the main pylon head in order to collect the large number of cables used. Each bridge employs 228 separate stays, and I think all these photos make clear that's simply too many stays. The visual complexity generated seems completely unwarranted by the structural demands, and surely the bridge would have looked simpler, cleaner and more elegant with fewer stays. A key design challenge, to me, would be how the new bridges should relate visually to the existing truss railway bridge, and there seems almost an attempt to hide the existing structure, or at least heavily distract from it. 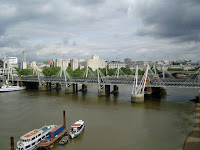 The spacing and inclination of the stays is also very odd. They cluster together at the span third points, with no stays at all near midspan, and a wider spacing towards the support positions. There is some structural rationale for this (the more vertical the stays are, the stiffer they are and hence the greater load they share - so fewer stays are required in the vertical regions, and more where they incline more steeply). However, I think it looks terrible, both because of the odd spacing, and because there are none of the more shallow stays that you would expect to see towards midspan in a conventional cable-stay bridge.

Incidentally, the bridge was named for Queen Elizabeth's Golden Jubilee in 2002. The Runcorn-Widnes Bridge had previously been renamed the Silver Jubilee Bridge 25 years previously, and this makes me wonder which bridge, if any, will get the honour of being the Diamond Jubilee Bridge. I can't help but notice that a certain bridge in Sunderland is proposed to start construction in 2012 ...

A huge improvement on what was there before - but I always think these bridges look better when you are walking on them than they do from the riverbank, unlike the Millennium Bridge which is the opposite. Also they look better at night when they are lit and the old bridge is not. Clearly not an ideal solution.