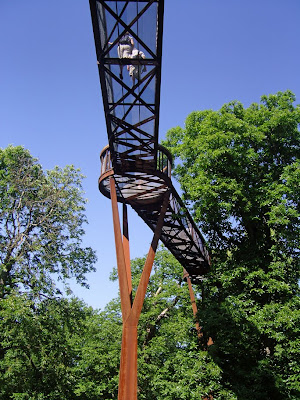 The two footbridges over the Thames weren't the only bridges I looked at in London recently. I also spent a day at Kew Gardens, and this post covers one of the two very interesting pedestrian walkways to have been built there in recent years.

Opened in May 2008, the Xstrata Treetop Walkway is one half of a visitor attraction within the Gardens (the other half being the Rhizotron, a short underground tunnel with information on tree roots). Rising 18m in the air, and 200m long in total, it allows visitors to wander amidst the treetops, reaching out and touching some of the closer trees. The design is by Marks Barfield with Jane Wernick Associates. It was built by W.S. Britland & Co. 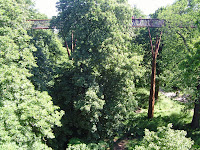 It's a considerable engineering achievement, considering the difficulties of bringing massive steelwork into the Gardens through narrow entrances and without damaging any significant vegetation. Each support had to be positioned very carefully to avoid tree roots, with the assistance of a radar survey. 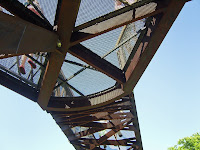 I haven't been able to find out for sure how much it cost, although The Independent reports £4m (figures elsewhere are less). If true, and considering the bridge is about 1.5m wide, that works out at £13k per square metre. It's actually a bit less than that considering that each 12m span is connected by "nodes", areas with space to rest and absorb the view (one node is intended as an aerial classroom), and I suspect the £4m may include the Rhizotron too. Nonetheless, it's in the big league of landmark footbridges, even though there is no river, road or rail to cross, the structure is essentially conventional, and the spans are hardly challenging. 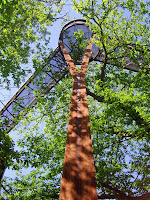 The money has gone into a spectacular but sadly non-functioning lift (it hasn't worked for most of the walkway's life, and is currently the subject of a legal dispute), the tree-like weathering steel towers, and the unorthodox and seemingly random geometry of the walkway trusses.

The use of weathering steel throughout is a great choice, not just because of the reduced need for future maintenance (especially valuable at height) but because it blends in well with the woodland setting. The support columns appear to have been carefully detailed so that water runs off easily, and the staircase is perforated to allow free drainage. 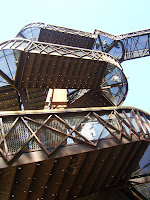 The walkway has a mesh floor, again eliminating drainage issues. The potential for rust to rub off on visitors' clothing has been avoided by the use of protective mesh panels and by covering the top rail in wood.

I think that in general it looks fantastic, especially from below. The tree-like columns are appropriate both in engineering and visual terms (although certainly not especially economic). As you look up through the floor mesh, you really want to get up there.

Once at walkway level, I was less happy, although this was as much due to mild vertigo as to any issues with the structure itself! The 1.3m high parapets were mostly reassuring, but the view down through the walkway grille was very disconcerting, and some of my companions found the whole experience quite difficult. The lack of reassurance meant that I concentrated more on negotiating the structure, and less on the trees that are supposed to be the real attraction.

In my own design work, I've had the question raised as to whether mesh flooring is in the spirit of the Disability Discrimination Act, as it clearly puts off visitors who suffer from more serious vertigo.

Up close, and indeed from most angles, the walkway trusses look like a jumble of metal struts thrown together randomly. If the idea is to give the impression of tree branches crossingly, it works very well. 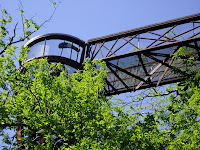 However, I gather the pattern is in fact quite ordered, and certainly the floor bracing can be seen to be symmetrical about midspan. There are a higher number of diagonal elements close to the supports, as you would expect broadly in line with the variation of shear force.

The actual density of diagonals is said to vary in line with the Fibonacci sequence, which is philosophically appropriate as Fibonacci numbers govern many patterns in nature, including the branching of trees. It doesn't make such direct structural sense, of course, as the maximum shear force in the trusses does not follow a Fibonacci progression.

The walkway has already several awards, and in my opinion, thoroughly deserves the acclaim.

Kew Gardens is an important research center as well as a wonderful place to spend a relaxing afternoon. The Gardens contain the largest collection of living plants in the world.

I like the idea that engineers were able to work with botanists to develop tools for studying the tops and bottoms of large plants.

I believe that researchers studying the roof canopy in rain forests use netting spread across the treetops for a similar purpose.